How Antibody Testing Can Help Us Fight COVID-19 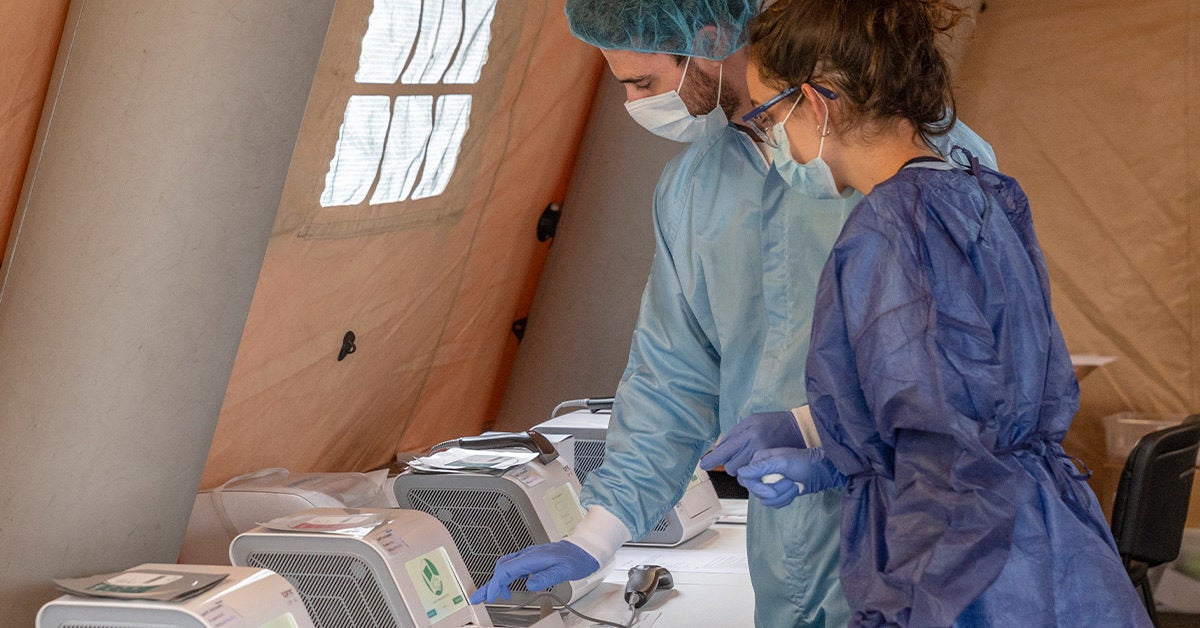 The Food and Drug Administration (FDA) has just approved the first antibody test for COVID-19 on Thursday.

The approval comes as a number of academic laboratories and medical companies are developing blood tests to help identify people who have contracted SARS-CoV-2, the coronavirus that causes COVID-19.

These tests could potentially identify those with immunity to the virus. This would enable healthcare workers, first responders, and other essential workers who are no longer at risk to return to work sooner.

There are two main types of COVID-19 tests.

Polymerase chain reaction (PCR) testing looks for the presence of the virus’ genetic material (RNA) on a nasal or throat swab. These tests can tell whether someone has an active infection.

The other type is serological testing. This type of blood test looks for the presence of antibodies produced by the immune system against SARS-CoV-2.

Antibodies help the body fight an infection and are specific to a virus, bacteria, or other pathogen.

“If [COVID-19] antibodies are present when you run the [serological] test, that means [a person] had the infection in the past,” said Dr. Juan Dumois, a pediatric infectious diseases’ physician at Johns Hopkins All Children’s Hospital, in a Newswise expert panel.

Also, “those antibodies can be present in someone who may have been infected but never even had any symptoms,” he added.

People with weakened immune systems, though, may not make these antibodies properly.

After transmission, it can take several days for the body to produce antibodies to a virus. That makes serological tests less useful than viral RNA tests for diagnosing someone with COVID-19.

But antibodies can last for a long time in the body, which makes them ideal for identifying whether someone had once contracted the virus — even if it was weeks ago.

Serological tests have been called “immunity tests” because, in theory, a person who recovered from COVID-19 would be immune to the virus.

Stephen J. Elledge, PhD, a Howard Hughes Medical Institute Investigator at Brigham and Women’s Hospital and Harvard Medical School, said if someone tests positive for antibodies to the virus — and is not in the middle of an ongoing infection — they likely contracted the virus previously and successfully fought it off.

“Under those circumstances, they should be immune to this current version of the virus,” he said.

However, because SARS-CoV-2 is new, many questions remain.

How long will that immunity last? Do people who had mild or no symptoms gain the same protection? Will the virus mutate to overcome the body’s immunity?

Researchers are starting to find some answers, but many may not be known for months or years.

In one small study, scientists gave the virus to Macaque monkeys and allowed them to recover. After 28 days, they exposed the monkeys to the virus again.

The monkeys were immune. But because this is a short-term study, it doesn’t show how long this protection lasts.

Other scientists are looking at people who recovered from SARS in 2003. The coronavirus that causes this disease is similar to the one that causes COVID-19.

If those people still have antibodies to the SARS virus, that might indicate how people will respond to the new coronavirus.

“That will give us a clue as to whether the immune response to the current virus may be long lasting or maybe on the order of years or so,” said Sumit Chanda, PhD, a director and professor of the Immunity and Pathogenesis Program at Sanford Burnham Prebys Medical Discovery Institute, in the Newswise panel.

There’s also a chance that the virus will mutate and overcome the body’s protection. Only time will tell, but so far the virus appears to be mutating slowly.

Right now, experts suspect that people who recover from COVID-19 will have protection against the virus for at least a short time.

Dr. Anthony Fauci, director of the National Institute of Allergy and Infectious Diseases, told the Doctor Mike YouTube show that they’ll have “some degree of durable immunity,” possibly a few years.

The FDA in February for these kinds of tests, which should speed things up somewhat. But companies still need to show that the tests are accurate.

On Apr. 1, the agency approved the first antibody test for use in the United States made by Cellex. It looks for antibodies in a finger prick of blood. It delivers results in about 15 minutes.

FierceBiotech reported that the test will be available by prescription, although there’s no indication of how quickly the tests will be rolled out.

As with other serological tests being developed, having antibodies to the virus is no guarantee of immunity.

Additionally, several groups are already working on serological tests for COVID-19. Researchers at Mount Sinai’s Icahn School of Medicine developed one of the first in the country.

Scientists at UCSF have also developed a test and expect to start using it this week, although it will not be available to the general public.

Other countries including the United Kingdom and Germany are eyeing these tests as a way to allow people who have immunity to come out of lockdown, like an “immunity passport.”

There may not be enough tests available for everyone in a country. So healthcare workers, police, first responders, and other essential workers will likely be the first to use them.

This would allow those who have immunity to the virus to get back to work sooner.

As more tests become available, though, serological testing might be a way for other people — or even entire sections of the country — to come out of lockdown earlier.

This would need to be done carefully to make sure people had fully recovered from COVID-19 and were no longer shedding virus particles.

Elledge recommends combining the antibody test with a viral RNA test, which looks for an active infection.

“If [a person] has no symptoms, they should be tested for virus nucleic acids,” said Elledge. “If they have no detectable virus, then one week later they should be allowed to go to work.”