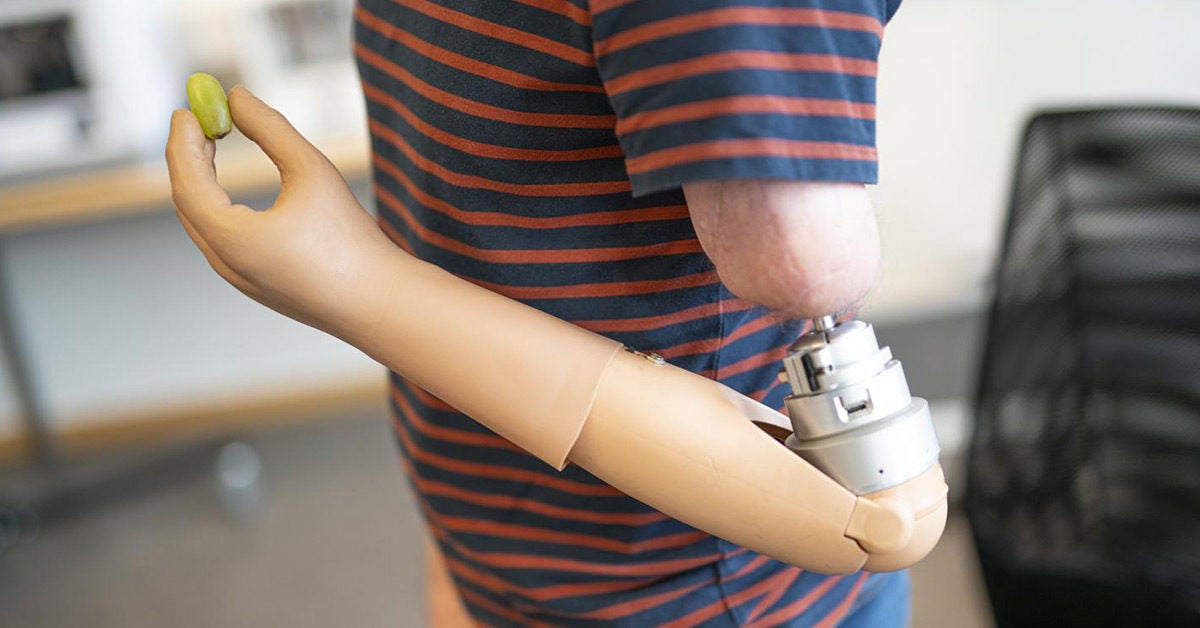 For the past 7 years, researchers in Sweden have been studying a new type of mind-controlled prosthetic arm that could drastically improve the lives of people who’ve lost a limb.

The arm prosthesis is implanted through a process called osseointegration, in which the prosthesis is surgically attached to the bone, muscles, and nerves.

The technology involves implanting electrodes that pick up on the brain’s signals and allows people to move, feel, and use the new limb in an intuitive, natural way.

A new report published in the New England Journal of Medicine on Thursday assessed the effectiveness of the new prosthesis and found it could successfully be used on a daily basis in a variety of personal and professional activities.

The development is a huge win for amputees, who’ve long been stuck with limited prosthetic options.

Conventional prostheses typically need to be suctioned to a person’s limb via a tight compression cup. Many amputees find prosthetic sockets uncomfortable and painful, causing many to stop using their prosthesis.

“The osseointegrated implants from Sweden are quite incredible and have really made the use of a prosthesis much more tolerable because it bypasses the discomfort of the compression cup that most users have to use with traditional and myoelectric prosthesis,” said Dr. James Clune, a Yale Medicine plastic and reconstructive surgeon and upper extremities specialist.

Researchers from Sweden followed four people who received the mind-controlled osseointegrated implants over the course of 3 to 7 years.

According to the study’s lead researcher, Max Ortiz Catalan, PhD, an associate professor at the Chalmers University of Technology, this is the first time a bionic arm functioning off of implanted electrodes was used independently by people at home, so there were a number of questions about the long-term stability and functionality of the prosthesis.

The technology had been studied extensively in the lab, but the researchers wanted to put them to the test in the real world. “You still need to [prove it’s] safe in real life when used by humans,” Catalan told Healthline.

The research team found that the prosthesis could be effectively used all day long in people’s personal and professional activities.

“The main contribution of our work is that we have [enabled the use] of implanted electrodes to control and provide sensation in [a] prosthesis that [is] used by patients in their daily life, finally outside of controlled environments or constantly supervised,” Catalan said.

One of the participants involved in the study, a 46-year-old man named Rickard Normack who lost an arm in a work-related accident, said in a video detailing the new prosthesis that he was never happy with his traditional sleeve prosthesis.

He eventually received a mind-controlled osseointegrated prosthesis and says it’s changed his life for the better.

Magnus Niska, a 47-year-old also involved in the program, says he can do anything with his new prosthesis, and that it feels like it’s his own.

An implant gets attached inside the bone of the remaining limb via osseointegration, which essentially extends the skeleton to where the prosthetic arm can be attached.

Then, electrodes are implanted in the patient’s nerves and muscles. When those electrodes pick up on a signal — e.g., a person wants to move their finger — they’re fed through an artificial intelligence algorithm that tells the prosthetic limb what to do: move the finger. The finger moves.

The researchers in Sweden call this process “intuitive control.”

The beauty of this type of technology is that it’s bidirectional, according to Dr. Adnan Prsic, a plastic and reconstructive hand surgeon at Yale Medicine.

“After the finger moves or touches something, this signal is then fed back to the sensors wrapped around nerves. The nerves receive this signal and send signals to the brain that create a ‘feeling’ of a realistic and immediate sense of touch,” Prsic explained.

“It is a true extension of the patient’s extremity,” Prsic added.

There are a few types of prostheses traditionally used among amputees.

There’s a nonfunctional limb that’s merely used for cosmetic purposes along with a body-powered limb that operates on a system of pulleys and cables.

There are osseointegrated limbs, but the ones widely available now don’t have the mind-operated technology.

Myoelectric prostheses are also used, in which a prosthesis has a customized socket that’s pulled over the residual limb.

Prsic says like the new mind-controlled osseointegrated limbs, the myoelectric prosthesis is more or less also mind-controlled. The brain sends an electrical signal to the nerves and muscles, which is then transferred to the prosthesis.

The key difference is that the electrical sensors used with myoelectric prostheses are attached to skin from the outside socket, whereas the new mind-controlled osseointegrated prosthesis has all the wiring under the skin, Prsic explains.

Conventional prosthetic limbs can be uncomfortable and painful. Many people wind up abandoning them.

“The progress in engineering and design, with the electrical components [and] technology now being more compact and efficient, has made a big difference,” Prsic said. “Additionally, lightweight and sturdy materials have revolutionized the size and weight of the prosthetics, making it user-friendly even for youngest of our patients.”

Clune says it’s “not a question of if this technology will be used here [in the U.S.], but when.”

He expects to see more widespread use of mind-operated osseointegration prostheses in the near future.

However, one of the biggest hurdles in bringing advanced mind-controlled limbs to market is the cost, Clune notes.

Already, multiple universities — including Johns Hopkins Medicine and University of Chicago — have developed and started testing their own mind-controlled prostheses.

At Yale, a team of doctors and scientists have formed a limb amputation program that focuses on rewiring the nerves in a remaining limb to help prepare it for an advanced prosthesis down the road.

“Even if the patient cannot attain an advanced prosthesis now, the nerves in their limb can be prepared surgically now in preparation for the use of emerging technologies in the future,” Clune said.

Prsic hopes the technology will continue to advance and fill in the remaining gaps in prosthesis control, and that it will become more accessible in the years to come.

“It is my hope to see myoelectric technology, both osseointegrated and non, become affordable and then widely available for all that need them, and not just for those that can afford to pay the heavy price tag,” Prsic said.

Researchers in Sweden have been studying a new type of mind-controlled prosthetic arm that could drastically improve the lives of people who’ve lost a limb.

The technology used involves implanting electrodes that pick up on the brain’s signals and allows people to move, feel, and use the new limb in an intuitive, natural way; if a person wants to move a finger, the prosthetic finger moves.

The development is a huge win for people who’ve lost a limb, a population that’s long had limited options for prostheses, many of which are uncomfortable and painful.