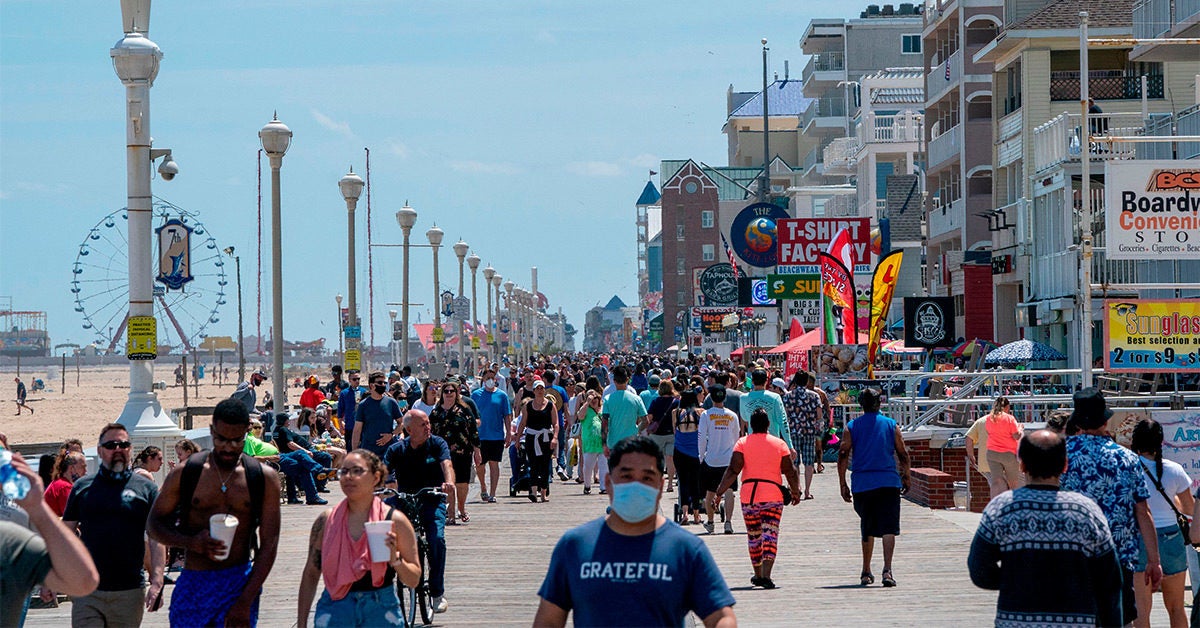 If you’re waiting to see when COVID-19 cases might start to increase after states reopen businesses and public facilities, you might not have to wait much longer.

In fact, in some states, it appears that upward trend has already begun.

A daily tracking map done by The New York Times reports that 14 states have had rising confirmed COVID-19 cases over the past 14 days.

Seven of those states are in the South, which was the first region to reopen businesses and public places.

The map also shows 17 states with decreasing case numbers over the past 2 weeks and 19 states where cases have plateaued.

A graph done by Reuters this week showed 20 states with an increase in COVID-19 cases for the week that ended May 24.

In many places, it’s difficult to pinpoint why or sometimes even whether cases are increasing and decreasing.

But some trends are emerging.

It appears reopening has likely been done more safely in some places than in others. Those experiences hold lessons for states that are still in the early phases of reopening.

“Some will say if case numbers are up, why reopen?… But we have to reopen,” Dr. David Rubin, MSCE, director of PolicyLab at Children’s Hospital of Philadelphia, which has been modeling the spread of COVID-19, told Healthline. “The discussion is how well you can contain transmission as you reopen.”

His models predict a resurgence in several places over the next couple weeks, including the Houston area.

Amid the uncertainty, here are five things we do know about how the reopening effort is going so far and what it means as the reopening process broadens.

Alaska has become the first state to more or less fully reopen.

After starting to lift restrictions at the end of April, Gov. Mike Dunleavy last week allowed restaurants, bars, gyms, shops, churches, and other facilities to open to full capacity.

Alaska was one of the few states that a late April study found was doing the minimum amount of testing to be able to safely reopen.

The New York Times tracking map lists Alaska as one of the 14 states with increasing cases, but the graph shows that state’s cases declining dramatically the past week.

Colorado may be another success story, at least so far.

The state’s COVID-19 cases peaked in late April and reopening began with salons and some other businesses on May 1. Cases have continued to decline since.

“Colorado and Denver have been doing well. They’ve been an example for the country,” said Rubin.

Over the next 4 weeks, his model expects cases in the state to remain around the current level in Denver County and decline in many of the state’s other counties.

The goal isn’t to eliminate the virus, Rubin notes. It’s just to maintain an equilibrium that prevents case numbers from rising out of control.

“I see many areas of the country that are teetering on that balance,” he said.

In many places, this may not fully be the fault of reopening — although it likely doesn’t help.

Some areas of the countries may be pushing too hard, too fast, Rubin said.

“What we see is a bunch of counties moving at very different speeds with some moving extremely fast, like in Texas and the South,” he said.

South Carolina began reopening retail shops in late April, and restaurants and bars are now allowed to be open.

The New York Times map lists South Carolina as one of the 14 states where cases are increasing. The graph shows a sharp uptick that began about a week ago.

The state also reported its largest daily increase in COVID-19 deaths on Wednesday.

Minnesota reported its highest single day death toll on Thursday. It’s listed on the New York Times map as one of the 14 states with an increase in cases.

Alabama’s allowed stores to open at the end of April and other businesses in mid-May. The state has seen a gradual increase since the start of May and a 28 percent jump in weekly cases last week.

In the past week, Alabama has also reported shortages of beds in its intensive care units (ICUs). In the state capital of Montgomery, hospital emergency rooms are now treating seriously ill COVID-19 patients as ICU beds fill up.

Missouri, which started to reopen in early May, is also starting to see an uptick in cases.

North Carolina allowed stores to open May 8 and restaurants to reopen on May 22. It is also reporting increases in case numbers on certain days.

Florida, Georgia, and Tennessee have also recently reported a rising trend in cases.

Other places have seen more localized jumps that are less likely to be tied to reopening, though could possibly be exacerbated by it.

Outbreaks at meat processing plants, such as one in Minnesota, have contributed to spread the virus.

As have outbreaks at places like nursing homes and jails, such as one in El Paso, where daily new cases in the city appear to have jumped after an earlier decline.

Some states and communities might want to keep an eye on South Korea, where public facilities in Seoul are now being closed again after outbreaks occurred after the reopening there.

Reported crowds at Memorial Day events last weekend underlined a potential complication to even the most conservative reopening plans: Some people will ignore the guidelines.

Before Texas allowed businesses to reopen May 1, for example, a Dallas salon disregarded the shutdown order and opened, sparking a standoff with local authorities.

“If we have replications of what I saw on television about Memorial Day weekend, we will have a resurgence (of the virus) before next fall,” Dr. William Schaffner, an infectious disease expert at Vanderbilt University in Tennessee, told Healthline.

A second wave of the virus is expected to come in the fall or winter, as with most influenza-like viruses, but that doesn’t mean another wave can’t hit before then.

We may have flattened the curve at a higher level than we’d like in most places, but we have largely flattened it, said Rubin.

But part of the variables there, he added, is that we can’t control what individuals will do.

The biggest determinant in whether reopening is going well or poorly in a region may be whether there is an increase in people being hospitalized with COVID-19.

This data varies greatly in availability across regions, making comparison difficult. It also varies because more people are being tested for COVID-19 at hospitals now than they were before.

“By now, if you have any respiratory symptoms at all, you’re tested,” said Schaffner. “Unfortunately (hospitalizations) are a lagging indicator. It takes a while for people to become sick enough to be admitted to the hospital.”

He says his home state of Tennessee (restaurants, stores, gyms reopened except in some large cities by May 1) is now seeing an uptick in hospitalization. But it isn’t clear yet if it’s a trend or just a blip.

On the other hand, tracking the number of positive cases — or even the percent of tests that come back positive — often doesn’t tell the whole story. Tennessee, Schaffner noted, first tested only people who were symptomatic, then tested everyone, and now is focusing on bringing tests to high-risk populations.

“As we do open up, all of us (medical experts) expect an increase in hospitalizations,” Schaffner said.

There are some notable trends.

Texas, which allowed all stores, restaurants, malls and movie theaters to open in early May, appears to have some of the worst projections.

Elsewhere, Hennepin County, home to Minneapolis, is projected to see an increase in daily new cases of more than a third.

Tuscaloosa County, Alabama, is projected to see them more than double.

In general, though, reopening hasn’t wreaked havoc — yet.

“I don’t see a clear pattern yet. There hasn’t been a clear explosion across the country,” Schaffner said.

There has been speculation that the virus could behave like the seasonal flu, which generally fades in the summer.

Schaffner acknowledged that was a possibility.

But we don’t know that yet, he said, and it’s unlikely to fully disappear.

“The virus is not going to take a summer holiday. It’s going to be with us, and will continue to smolder around,” he said.