What It’s Like in Hospitals in Texas and Arizona 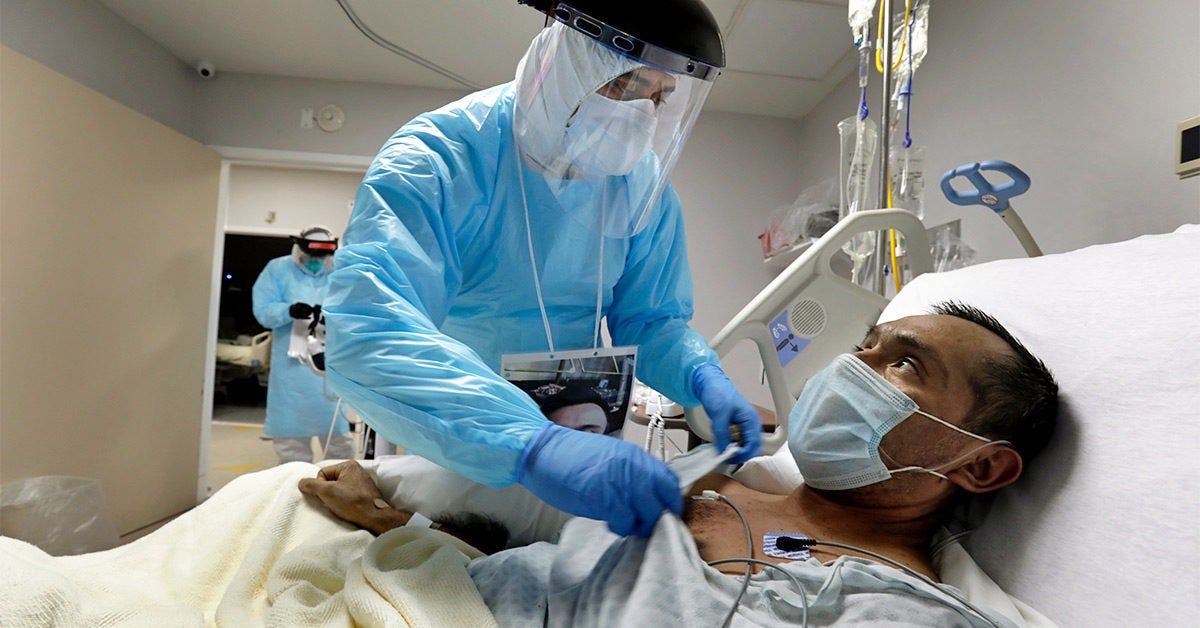 At the peak of Italy’s COVID-19 outbreak, some overwhelmed hospitals were forced to ration care and equipment, such as ventilators, giving priority to those deemed most likely to survive and leaving others to their fate.

The state of Arizona may be close to that nightmare scenario with rising cases of COVID-19 and no immediate end in sight.

A similar scenario is playing out in Texas, too.

Facing critical staff and capacity shortages amid rising COVID-19 cases, hospitals in Arizona have been officially empowered to make life-and-death decisions, with scarce resources being reserved for patients deemed to have the greatest potential for survival.

The “crisis care standards” enabled by the Arizona Department of Health Services provides legal cover for hospitals that conduct wartime-style triage intended to save the most lives while acknowledging that the decisions will likely result in some people dying.

“In rural Arizona, if you are very sick and elderly and present with a lot of comorbidities, that reality may already be here,” said Charles Larsen, RN, the senior director at Banner Health in Arizona and director of the registered nurse program on the COVID-19 Response Team.

“In inner-city Phoenix, if you’re young and healthy, I don’t think it’s crazy to say it’s not far away if we don’t do something” to reverse the state’s COVID-19 trends soon, Larsen says.

“Triage care is something we all learned about in medical school,” Larsen told Healthline, “but we never thought we’d be here.”

“We know it’s only likely to get worse in the next 4 to 6 weeks,” Larsen said.

More than half of Arizona’s COVID-19 cases are in Maricopa County, which includes the cities of Phoenix and Mesa.

The surge in COVID-19 cases prompted state officials to roll back the reopening of many businesses, including bars, gyms, and movie theaters.

Businesses were ordered shuttered for 30 days by Gov. Doug Ducey, who previously had allowed these and other businesses to reopen in May.

Meanwhile, capacity in intensive care units (ICUs) is now at an all-time high in Arizona, with 86 percent of the adult ICU beds full as of June 20, up from 62 percent in late March.

“We’re holding our own right now, but we don’t have a lot of wiggle room,” Michael White, MD, chief medical officer of Valleywise Health of Maricopa County, told Healthline.

In response, some hospitals have activated surge-capacity plans. For example, Banner Health, the state’s largest hospital system, is now diverting non-COVID-19 patients to its Cardon Children’s Medical Center in Mesa.

“If the hospital is at 80 percent of bed capacity, it’s really at 100 percent of staffing,” Larsen said.

He adds that the capacity numbers can also be misleading because some beds labeled “unoccupied” at any given time are actually being cleaned, or are already designated to be filled with patients from other departments, such as the emergency room.

Larsen says that Banner has been able to learn from the experiences of places such as New York and Michigan in terms of ramping up capacity and better methods to treat people with COVID-19.

Nurses specializing in other areas, such as telemetry, are being retrained as ICU nurses, says Larsen, and nurses are being brought in from other parts of the country to add staffing capacity.

But Larsen is concerned that a spike in cases in other parts of the country moving to reopen businesses, such as New York, could increase competition for a limited pool of mobile healthcare professionals.

The notion that everything is bigger in Texas is bad news regarding COVID-19.

Like Arizona, Texas has experienced a dramatic increase in confirmed COVID-19 cases after adopting a laissez-faire attitude toward preventive steps, such as mask-wearing, physical distancing, shutdowns, and stay-at-home advisories.

According to the Texas Department of State Health Services, the state had 75,000 new cases between June 8 and June 29. It took Texas 3 months to reach its first 75,000 cases.

At the Texas Medical Center in Houston, the largest medical center in the world, officials reported last week that 100 percent of its nonsurge ICU beds are now full.

“They are definitely a concern, especially if we continue on this trajectory. This path, if it continues, would not be sustainable long term,” she said.

As in Arizona, COVID-19 caseloads vary greatly from region to region.

Those locations were added to a list that already included Bexar, Dallas, Harris, and Travis counties.

“Texas hospitals are managing patient volumes as they see increases due to COVID-19 and have the ability to shift patients, slow down or pause scheduled procedures to free up space, and activate additional beds,” Williams told Healthline. “With a state the size of Texas, hospitals have to stay nimble based on what they are seeing on the ground on any given day.”

“We’re very confident in our abilities as an industry to manage this, but absolutely need people to do their part,” she added.

“The general public has the ultimate power to stop this disease. Wearing a mask should be automatic in public, and social distancing and washing hands are incredibly powerful tools everyone should be using,” Williams said.

In both Texas and Arizona, healthcare officials are anxiously awaiting the holiday weekend, when Independence Day is traditionally a time for backyard barbecues and large gatherings.

“We are looking ahead to the July 4 weekend and tripling down on our messages for people to wear a mask and stay safe,” Williams said. “From the hospital perspective, it’s about the simple fact that we don’t want people to get sick, and hospitals want to be able to take care of them if they do.”

“It’s going to be 105 to 110 degrees out in Phoenix on the Fourth of July. Do we really believe that people will be wearing masks?” Larsen said.

“It’s pretty clear to see that opening up as we did was not the right thing to do. Hopefully people are heeding what they’re seeing and hearing from healthcare professionals. We’ll know in a few weeks,” he said.