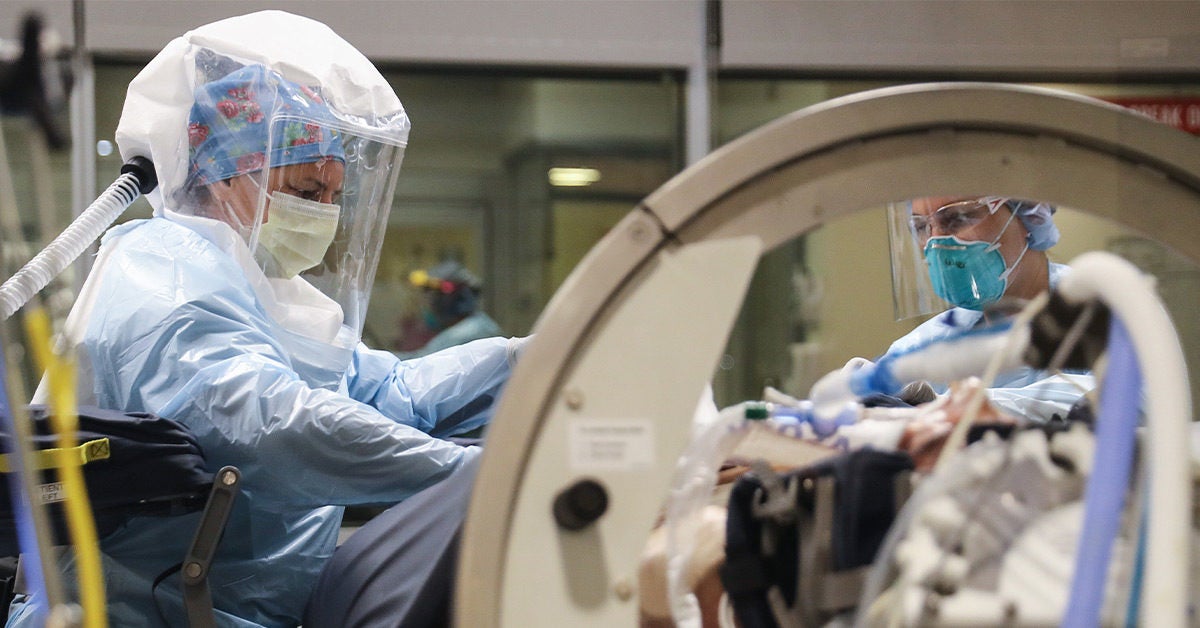 The number of new COVID-19 cases reported in the United States continues to grow, particularly in the southern and western regions of the country.

Over the past 2 weeks, the national 7-day average of new daily cases has risen more than 60 percent, according to 91-DIVOC, a tracking site powered by data from the John Hopkins Center for Systems Science and Engineering (JHU CSSE).

Over the same time period, the national mortality rate from COVID-19 has remained relatively stable, but that might be starting to change.

The country’s 7-day average of new daily deaths has started to creep up.

The 91-DIVOC plot of JHU CSSE data shows that it’s risen from about 580 deaths per day on Tuesday to 600 on Wednesday to 640 on Thursday.

Many health experts have been anticipating a growth in the mortality rate as a delayed consequence of the recent surge in new cases.

“The thing that I can’t actually know and I’m worried about is that this is simply the lag between the onset of infection and a sudden spike in the mortality,” Dr. Jerry Levine, chief medical officer at Chilton Medical Center in Pompton Plains, New Jersey, told Healthline.

“I hope not, I pray not, but I would not be surprised in the next 2 weeks if we begin seeing a spike in the number of patients that die,” he added.

Multiple factors might help explain why the national mortality rate from COVID-19 has not risen as quickly as the new case rate.

Among other potential contributors, the lag that occurs between new infections, hospitalizations, and deaths might be playing a substantial role.

It takes time for symptoms and complications of the disease to progress to a potentially life threatening stage, in people who develop severe cases of it.

“What we found [in New York] is people would get infected, and somewhere around day 8 or 10 is when they would have that terrible inflammatory response, if they were going to have it,” Dr. Teresa Murray Amato, chair of emergency medicine at Long Island Jewish Forest Hills in Queens, New York, and director of geriatric emergency medicine at Northwell Health in Manhasset, New York, said.

“And then from that point on, it would take another couple of weeks until we would see whether they would get better or unfortunately pass away,” she said.

Time will help tell how much of a role the lag between new infections and deaths has been playing in curbing the national mortality rate.

It’s possible that the case fatality rate for COVID-19 has also declined.

In other words, a smaller portion of people who’ve recently tested positive for the virus might die from it, compared with the earliest days of the pandemic.

If that’s true, it might reflect changes in testing, demographic shifts in who’s been testing positive for the virus, advances in treatment, or other developments.

“Everything we talked about with COVID is very much a surmise, because it’s a new virus that up until 6 months ago never existed,” Amato said.

“It’s based on some facts, and it’s also based on surmising and looking at trends and sort of figuring out why things are happening,” she added.

At the outset of the pandemic, limited testing capacity greatly restricted the number of people that health authorities could test for the virus. So they focused their efforts on people who were severely ill or deemed high risk.

Testing capacity has since increased, enabling authorities to detect and diagnose more mild cases of the virus than they did before.

The median age of people who are testing positive for the virus has also fallen in many counties and states, where adults under the age of 45 account for a large portion of new cases.

That might help explain why the national mortality rate has been slow to rise while new cases have spiked, since younger adults are much less likely than older adults to die from COVID-19.

“The age group seems to be more people in their 20s and 30s,” Amato said, “which we know from what happened in New York, seem to have better outcomes than their older counterparts.”

Medical professionals have also been honing their approaches to treating COVID-19, which might be helping to keep more patients alive.

“We’ve learned a lot during the first wave of what not to do and what to do,” Levine told Healthline, “which I hope would reduce mortality.”

For example, last month, researchers from the RECOVERY trial reported that the use of a steroid known as dexamethasone was linked to lower rates of death in people with severe respiratory complications from COVID-19.

Healthcare providers have also gained insight into when it’s helpful to intubate patients, how patients should be positioned in their beds, and which patients are at high risk of complications.

Although advances in testing and treatment might be helping to slow the national mortality rate, COVID-19 continues to have devastating effects.

COVID-19-related hospitalizations have begun to rise at a national level,
driven by recent increases in some of the states where new cases have been
surging. Death rates in some of those states have also been climbing.

Even when patients with severe cases of COVID-19 do survive, they’re still
at risk of potentially disabling complications, such as blood clots
in the lungs and stroke.

Some community members are at particularly high risk of severe complications — including older adults, people with underlying health conditions such as diabetes.

To help protect vulnerable community members and prevent serious illness and death from COVID-19, Amato urges people to take steps to limit the spread of the virus.

“People still need to be vigilant, and even if the death rate seems like it’s going down, still wear the mask, do the social distancing, try to protect the more vulnerable populations,” she advised.

“I would just really stress that people have to take this seriously,” he said. They “have to do what they need to do to try to push this down and prevent new infections.”