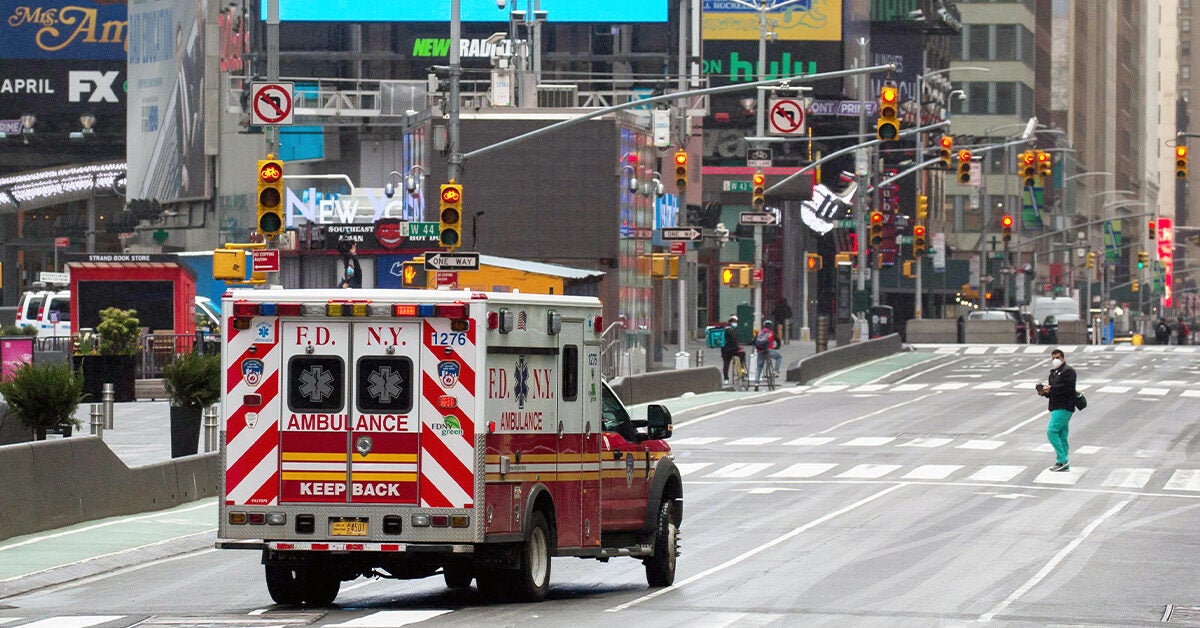 The number of deaths in New York City during the first two months of the COVID-19 outbreak was about 70 percent as deadly as the peak of the 1918 H1N1 influenza outbreak in the city, according to a .

The study, which was published August 13 in the medical journal JAMA Network Open, compared all-cause deaths during 61-day periods at the peak of the flu epidemic in 1918 and early in the spring of this year.

Researchers found that the number of deaths during both periods were more similar than people may expect after a century of medical innovation.

For the study, they examined public data from the Centers for Disease Control and Prevention (CDC), the New York City Department of Health and Mental Hygiene, and the U.S. Census Bureau.

The H1N1 influenza pandemic, also known as the Spanish Flu, lasted from February 1918 until April 1920.

Generally regarded as the worst pandemic in modern history, about 500 million people around the world contracted the virus and it killed about 50 million globally, including 675,000 in the United States.

To date, COVID-19 has been responsible for more than 170,000 deaths and over 5.4 million infections in the United States.

The beginning of the first wave in the United States arrived in the spring of 2020 with numbers skyrocketing in New York.

Dr. Amesh Adalja, an infectious diseases physician and senior scholar at Johns Hopkins University Center for Health Security, called the study “a very simple and elegant” way to quantify what happened a little over 100 years ago and what’s going on now.

“It tells you that [COVID] is a disease of significant virulence,” he said, adding that the world still managing to go on, despite all the flu-related havoc and death, is remarkable.

Alex Navarro, PhD, assistant director of the Center for the History of Medicine at the University of Michigan, said there are lessons from the 1918 pandemic that are just as applicable today.

“We know that the early and sustained use of nonpharmaceutical interventions like school closures are always very helpful,” said Navarro, co-editor in chief of The American Influenza Epidemic of 1918–1919: A Digital Encyclopedia. “But they have to be sustained. That’s the real lesson to come out of this first phase.”

“We have a lot more data, and we have to sustain this effort,” he added. “In 1918, cities had more difficulty sustaining that effort. We run the real risk of doing what happened in 1918 by removing measures too soon.”

While applauding the study, Tom Ewing, PhD, a professor of history at Virginia Tech, said there are a couple of caveats.

First, there are the death estimates, which he said aren’t well documented.

“The 675,000 is based on U.S. Census figures, but back then the census only counted what amounted to about 80 percent of the country,” said Ewing, a recipient of grants from the National Endowment for the Humanities for running workshops on the 1918 influenza pandemic.

As for the estimated 50 million deaths globally, he continued, the figures in some parts of the world were not well documented. By some estimates, as many as 100 million people died.

Another big caveat for this study is the fact that New York City wasn’t particularly hard hit by the 1918 flu.

“New York City was average. Philadelphia was by far the worst. Boston was bad and San Francisco was bad,” said Ewing. “In 1918, infections were high across the board — small towns, large cities, and rural areas. COVID affects the whole country but is doing it unevenly.”

And it should be noted that New York City had a relatively benign experience during the 1918 pandemic, added John Barry, MPH, an author, historian, and professor at Tulane University in New Orleans.

Adalja said the study highlights the need for cities like New York to be aggressive about contact tracing and expanding hospital capacity.

“Hospitals have been closing [in New York City], so that decreases capacity,” he said. “They need to think about expanding capacity because this won’t be the last pandemic. Anytime you went to a hospital in New York City in the last 10 years, it wasn’t in and out. It took a while to get a bed upstairs.”

Navarro added, “If we overrun our healthcare structure in any community, that would lead to increased deaths. We would have to make hard decisions and people may end up dying or having lifelong issues. We can make it far less deadly if don’t overrun our health infrastructure.”