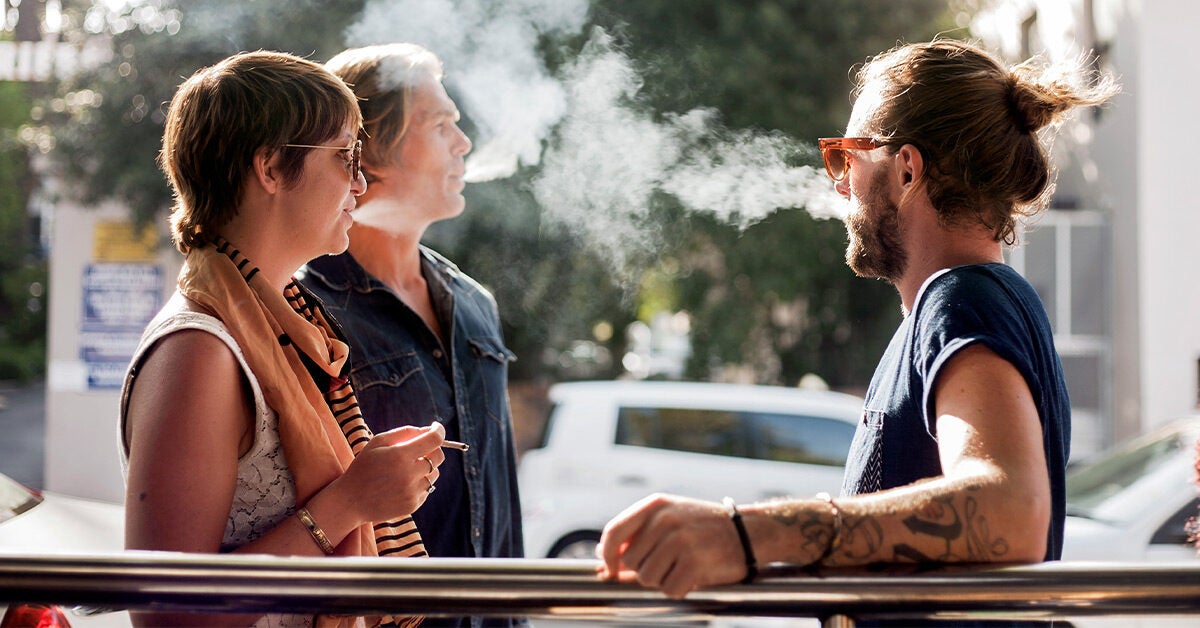 Secondhand smoke has always been a killer, but COVID-19 has made exposure to tobacco smoke potentially deadlier.

And exhaled e-cigarette vapor may be even more dangerous.

Experts say both cigarette and e-cigarette smoke can transport the novel coronavirus, which travels from person to person on microscopic droplets of water vapor exhaled from the lungs.

“When a vaping cloud is exhaled, it contains an enormous amount of particles,” Loren Wold, PhD, an expert in airborne particulate matter, director of Biomedical Research in the College of Nursing, and an associate professor in the Colleges of Nursing and Medicine at The Ohio State University, told Healthline.

“What we don’t know is how far the particles can go. We know that the virus can attach to particles and can travel three, four, or five times farther than they would by simply being in the air.”

Even just normal breathing can spread the disease, which is why face masks are recommended to keep virus particles from spreading freely through the air.

In addition, smokers aren’t wearing masks when they’re dragging on a cigarette or vaping. Wold says smokers often exhale more forcefully, meaning that the particles they push out of their lungs can travel even farther.

In some competitions called “cloud chasing,” vapers push clouds of visible vapor from their lungs up to 6 feet.

A also found that e-cigarette users saw the ability to generate a large cloud of exhaled vapor as one of the most attractive aspects of vaping.

“The cloud gives you a very good idea of how far you need to stay away from it,” noted Dr. Len Horovitz, a pulmonary specialist at Lenox Hill Hospital in New York.

As for cigarette smoke, Horovitz told Healthline that if you can smell it, you’re probably too close.

According to the National Institutes of Health, secondhand smoke can stay in the air for several hours and travel up to 20 feet.

Horovitz says that vaping and smoking are closer to singing or shouting than speaking in terms of how far exhaled novel coronavirus droplets can travel.

In , dozens of members of a choir group in Washington state contracted COVID-19 after a practice session.

“The act of singing, itself, might have contributed to transmission through emission of aerosols, which is affected by loudness of vocalization,” the Centers for Disease Control and Prevention (CDC) noted.

“The pursed-lip, forced exhalation of smoking can cause smoke to travel at least twice as far as regular talking,” said Horovitz.

Vapers are particularly susceptible to spreading SARS-CoV-2 to each other because vaping is often a group activity, said Wold.

Because most users view vaping as less harmful than cigarette smoking, many “tend to vape indoors where they would not smoke,” Dr. Joi Lucas, a pediatric pulmonologist at Lakeland Regional Health Medical Center in Florida, told Healthline.

However, research has shown that the highest risk of novel coronavirus transmission is in indoor spaces.

“People who vape are more likely to transmit COVID-19,” said Lucas. “Not only is it dangerous to vapers, but it’s dangerous to those in proximity to vapers or those who walk through those vaporized droplets.”

Smokers and vapers are believed to be at especially high risk for contracting COVID-19, making coming into contact with tobacco smoke or vaping clouds even riskier.

A recent Stanford University study, for example, found that teens and young adults who have used e-cigarettes were five times more likely to be diagnosed with COVID-19 than nonusers.

Those who used both e-cigarettes and conventional cigarettes in the previous 30 days were almost seven times more likely to be diagnosed with the disease.

“X-rays of lung damage caused by vaping and COVID-19 can look very similar,” said Horovitz, “and that damage can make the lungs more vulnerable. Vapers are probably more susceptible to getting COVID because they have more epithelial damage that allows more inroads of the virus.”