Here’s Why We Can’t Rely on Rapid Coronavirus Testing 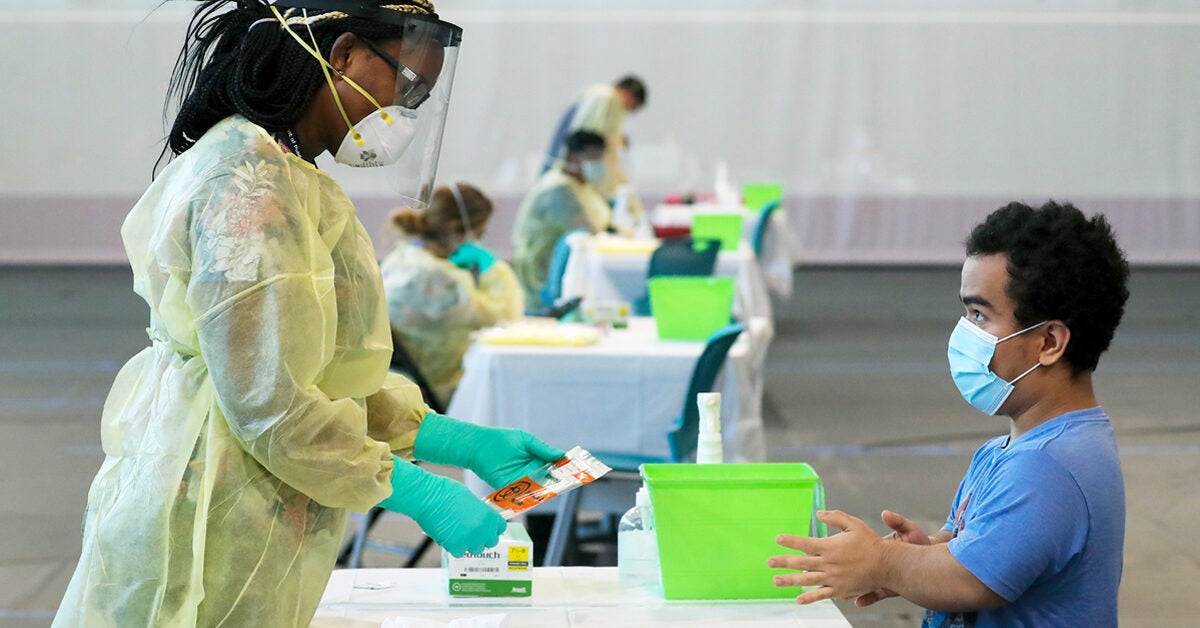 Earlier this month, shortly before Ohio Gov. Mike DeWine was due to meet President Donald Trump at a Cleveland airport, the governor tested positive on a rapid antigen test for the new coronavirus, SARS-CoV-2, that causes the disease COVID-19.

This kind of false positive with an antigen test isn’t an isolated incident.

Dozens of people who took a rapid SARS-CoV-2 test developed by biotech company Quidel at a Manchester, Vermont, clinic in July were told they had the virus.

Subsequent PCR tests run by the state’s Department of Health found that only 4 out of those 65 were positive.

With people across the United States returning to work and school — and flying and eating out — companies, businesses, and universities are turning to rapid tests as a way to identify people who have the virus.

But no test is completely accurate, which means that some cases will be missed (false negatives) and some people will be told they have the virus even though they don’t (false positives).

This can create confusion, especially when people aren’t aware of what type of test they’ve had done.

But some experts say that widespread testing, even if it’s less accurate, can still help contain the COVID-19 pandemic in the United States.

The Centers for Disease Control and Prevention (CDC) considers PCR tests the “gold standard” of SARS-CoV-2 testing. These tests are run by laboratories at hospitals, universities, and public health agencies.

Some labs can process samples within 1 day, but sometimes it takes much longer — with people waiting a week or more to find out if they tested positive.

Antigen tests can be done more quickly — with results in as little as 15 minutes — using saliva or a nasal swab. Like PCR tests, antigen tests show whether someone has an active infection.

Although antigen tests are faster and the number of tests being run can be easily scaled up, they have a high false-negative rate — with as many as half of negative results inaccurate.

The Vermont Department of Health counts a positive antigen test as a positive case only if it’s been confirmed with a PCR test. Other states have similar procedures.

But PCR tests aren’t always accurate. Some studies have found that up to 29 percent of these tests can give false negatives.

The accuracy of these tests — both PCR and antigen — vary widely based on the test and its manufacturer.

Other factors can also affect the results: how a nasal swab or saliva sample was collected, how the sample was transported, how a person runs the test (and if they’ve been trained properly), and the equipment being used.

The goal of testing is to identify people who have an infection with SARS-CoV-2 so they can prevent spreading it to others.

But if people don’t receive their results for 2 weeks or longer, it doesn’t matter how accurate the test is. They’ve already missed the chance to self-isolate.

Laboratories can reduce backlogs to some extent by adding more equipment and technicians, or by automating procedures.

Some experts have also proposed , in which samples are mixed together before testing. If a batch tests positive, individual samples — or smaller groups of samples — are tested. This reduces the number of tests that need to be run.

“To really be able to run the testing at a massive scale, you need to be able to decentralize where the test is being done,” he said. “Which is why you need the doctors’ offices and the dental offices to be running the tests. You can even have minilabs that can run a lot of the tests at airports.”

A simple, fast test that can be run at schools, restaurants, airports, and stadiums would enable these places to identify people who have an infection before they enter. This would reduce the risk of transmission in public settings.

Sorrento is working on marketing a rapid test that was developed by Dr. Zev Williams and his team at the Columbia University Fertility Center in New York City.

The test can detect the presence of the new coronavirus’s RNA in a saliva sample in as little as 30 minutes. If the test is positive, the color of the fluid in the tube changes yellow.

Preliminary analysis shows that the test is highly accurate, along the lines of a PCR test. But unlike PCR tests, which require specialized equipment, Sorrento’s saliva test only requires a simple heating block.

“This test would be absolutely suitable for a doctor’s office, or a hotel before people check in, or the airport before people get on a plane,” said Dr. Mark Brunswick, Sorrento’s senior vice president of regulatory affairs.

He adds that the company expects to submit an application for approval of its saliva test to the Food and Drug Administration (FDA) by the end of next week.

Others agree about the need for decentralized testing.

Dr. Michael Mina, a professor of epidemiology at Harvard T.H. Chan School of Public Health in Boston, argues that the United States should be testing nearly everyone in the country almost every day — which means running tens of millions of tests a day.

For that to happen, the tests need to be simple, cheap, and available everywhere.

But Bobby Brooke Herrera, PhD, co-founder and CEO of biotech company e25 Bio, told The Atlantic that because the FDA compares newly made coronavirus tests to the PCR test, companies developing tests are focused on accuracy at the cost of speed and convenience.

E25 has developed a paper test strip that can detect SARS-CoV-2 infection within 15 minutes with a saliva sample. It hasn’t yet been approved by the FDA.

Opening up the door to less accurate tests for the general public doesn’t mean throwing out PCR completely. Hospitals and other places that need highly accurate results will continue to use this type of test.

But for wide-scale, everyday testing, less accurate could still work.

In an article on STAT News, Drs. Jeffrey L. Schnipper and Paul E. Sax, both professors of medicine at Harvard Medical School, explain the statistics of how less accurate tests can help reverse the pandemic — if the tests are done frequently enough.

“Even though the test isn’t perfect, it’s far better than what we’re doing now, which is testing hardly anyone without symptoms,” they wrote, “in part due to concerns about testing accuracy.”