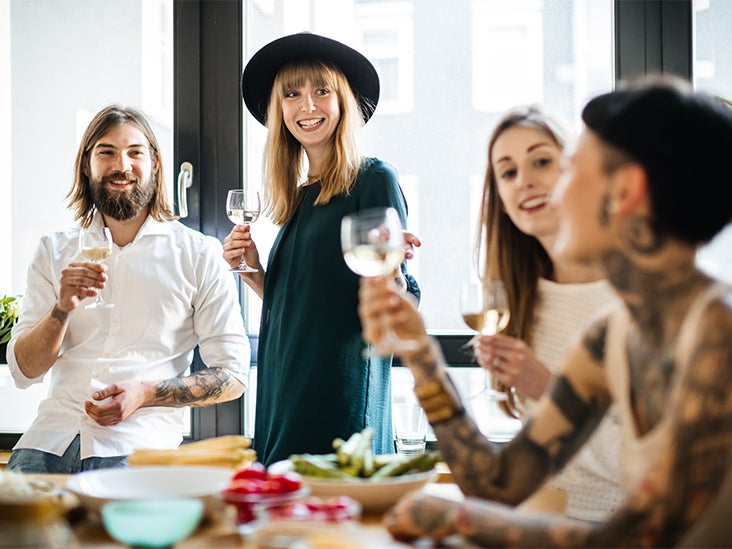 A beer or glass of wine can be a relaxing way to wind down at the end of the day. It’s within the government guidelines for moderate drinking, so there’s no harm, right?

Not so fast, according to researchers from the University of Victoria, who are calling on the Canadian government to make its low-risk alcohol limits more restrictive. They published a new study that found that even people drinking within the government’s guidelines experienced more deaths and cancers than those who abstain from alcohol.

Is alcohol really to blame for these bad health outcomes, though? Some doctors say that the study fails to consider other risk factors and that the findings may be overblown.

In a new study published today in the Journal of Studies on Alcohol and Drugs, researchers looked at data from records of all overnight hospital stays experienced by residents of British Columbia in 2014 to calculate deaths, diseases, and hospitalizations that can be attributed to alcohol use.

They also used data from the Canadian Substance Use Exposure Database to estimate levels and patterns of alcohol use by age and gender and applied them to the hospitalization records, dividing the people in the study into four drinking groups: lifetime abstainers (9 percent), people who used to drink but haven’t had alcohol in at least a year (14 percent), people who drink within the low-risk guidelines (65 percent), and people who drink above weekly guidelines (12 percent).

After analyzing both sets of data in mathematical formulas, the researchers concluded that alcohol was “causally responsible” for more than 2,000 net deaths, of which 38 percent occurred in people who have given up alcohol or drink within the weekly guidelines. Nearly a third of overall alcohol-caused hospitalization also came from within that group, the study said.

Overall, more than half of the cancer deaths the researchers attribute to alcohol came from the group of people who drink moderately.

There’s no question that of some cancers, including cancers of the larynx, esophagus, and colon — which aligns with sentiment of the findings in the new research.

However, the report doesn’t take into another major factor in a person’s cancer risk: smoking. This missing data may have led to an overemphasis of drinking on certain bad health outcomes, some doctors say.

“What bothered me most about this study was the cancer finding… because no other confounding factors were taken into account,” said Dr. Tiffany Sizemore-Ruiz, a board certified cardiologist and medical advisor to the Distilled Spirits Council.

“Between 80 and 90 percent of alcoholics are also smokers. How do we know that the alcohol caused a given cancer, and not smoking, genetics, family history, and so forth? If you look at all cancers the researchers attribute to alcohol, they’re also attributable to smoking.”

Dr. Damian Caraballo, an emergency medicine physician and member of Physicians for Patient Protection, agreed that the researchers should have taken tobacco use into account, as well as other health and lifestyle factors that may be affecting cancer rates.

“Can people who don’t drink be healthier people in general?” he said, referencing Seventh-day Adventists.

The group, which is known for having a longer-than-average life span and lower rates of cancer, encourages its members not to drink, but also urges a plant-based diet and abstinence from cigarettes and drugs — habits that lead to an overall healthier lifestyle.

“You can’t look at alcohol in a vacuum and say if you had two drinks, rather than one drink, your risk of cancer is higher and not take into account everything else,” said Dr. Alexis Halpern, an emergency medicine physician at NewYork-Presbyterian/Weill Cornell Medical Center.

“There’s not a really good way to isolate alcohol without discussing the other risk factors in someone’s life.”

Doctors also expressed concern that including former drinkers, who may have recovered from years of heavy alcohol use and experienced long-term health damage, in the same group as those who adhere to the low-risk drinking guidelines when discussing certain results (like deaths) could be leading to skewed conclusions.

The Canadian government’s low-risk drinking guidelines state that men should consume no more than 15 drinks per week, while women should limit themselves to a maximum of 10 drinks per week. The limits are more generous than , which encourages men to avoid more than two drinks per day and women to stick with just one.

The study’s lead author concludes that high-income countries should lower drinking guidelines to match those of the Netherlands, which state not to drink, but if you are going to drink, limit it to one drink per day.

Doctors have mixed feelings about the recommendation to change guidelines.

“There are many studies that show that alcohol has these horrible adverse effects on health, but there are also many studies that say the opposite,” said Sizemore-Ruiz. “While I’m never going to suggest that someone start drinking for their health, I’m not going to dissuade them from drinking a glass of wine at night when I know it (can reduce the risk of heart disease).”

Caraballo, on the other hand, said that government guidelines aimed at curbing heavy drinking could help reduce accidents.

“The risk of accidents related to alcohol is understated. About two-thirds of the serious accidents or assaults we see in the ER are drug- or alcohol-related,” he said.

Finding ways to get people to pay attention to how much they’re drinking and ultimately cut back on potentially dangerous alcohol use — especially during the pandemic — could help people have healthier lifestyles, said Halpern.

“The world is a mess, people are stressed out, and with so many people still stuck at home, it’s very easy for alcohol to be the thing you look forward to at the end of the day,” she said.

“If you want to take this study to heart, maybe don’t have that second glass of wine or next beer. We have to make sure we’re paying attention to what we’re doing to our bodies right now, despite all the other stresses in the world.