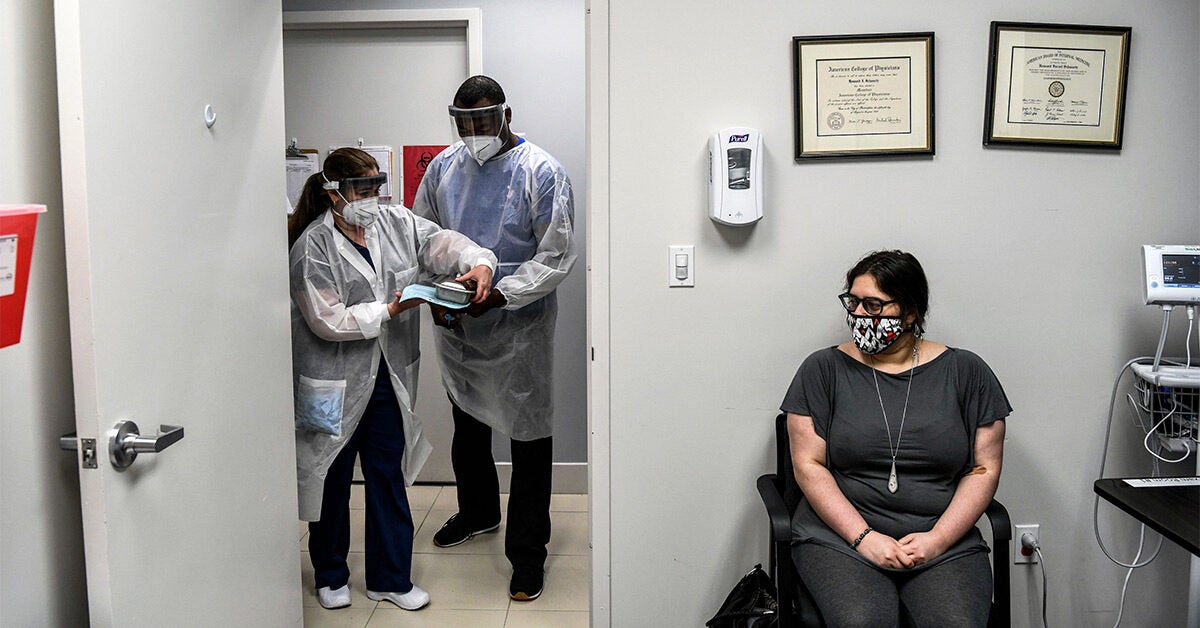 Too few people in the United States typically get the flu shot to achieve “herd immunity.”

That’s the point at which enough people in a population are immune to an illness so that community spread of that disease declines or disappears.

That’s discouraging news for the upcoming flu season and also may not bode well for the ability to achieve herd immunity for COVID-19, an ailment for which no vaccine is currently available.

A new study from researchers at the University of California, San Francisco found that self-reported flu vaccination rates were as low as 16 percent among people without health insurance.

Researchers noted that insurance status, having a personal doctor, and age were among the biggest determining factors in whether Americans receive an annual flu shot.

The study also noted that fewer than half of U.S. adults received the flu vaccine during the 2017–2018 season, when 61,000 Americans died from influenza.

“To achieve herd immunity, we would need to reach about an 80 percent vaccination rate, but no subgroup in our study exceeded 60 percent,” said Dr. R. Adams Dudley, a senior study author and a professor of medicine at the UCSF Philip R. Lee Institute for Health Policy Studies and School of Medicine. He is also associated with the University of Minnesota School of Medicine, School of Public Health, and Institute for Health Informatics.

According to Dudley and his colleagues, flu vaccination rates varied widely based on demographics and other factors. For example:

Women (42 percent) were more likely to get a flu shot than men (37 percent), while vaccination rates were lower among Blacks and Hispanics (34 percent and 29 percent) than whites and Asians (42 percent and 38 percent).

Vaccination rates also varied widely by region from a low of 26 percent in Texas to a high of 44 percent in Washington, D.C.

Dudley said that some of the steps taken to prevent spread of COVID-19, such as mask wearing, handwashing, and physical distancing, also should help prevent the spread of seasonal flu.

“However, in-person healthcare visits have fallen dramatically in favor of tele-visits, especially in primary care, during the pandemic so opportunities for flu shot administration will be much more limited. This is where wide availability of the flu vaccine outside of traditional clinics, like in grocery-store pharmacies, is especially critical.”

However, Dr. Faisel Syed, the national director of primary care for ChenMed, which operates primary care medical practices for seniors in 10 states, said the U.S. response to COVID-19 may actually make it less likely that people get vaccinated against influenza this year.

“Right now, there is a lack of confidence in our healthcare systems,” Syed told Healthline. “I can’t imagine with all the misinformation around COVID-19 that it will in any way increase someone’s desire to get a flu vaccine.”

Protesters took to the streets over the weekend in Massachusetts, for example, after state officials mandated flu vaccination for all students returning to class this fall.

The Centers for Disease Control and Prevention (CDC) has announced a goal of getting 65 percent of Americans immunized for the flu in a bid to establish herd immunity and prevent a major flu outbreak on top of the COVID-19 pandemic.

“This fall nothing can be more important than to try to increase the American public’s decision to embrace the flu vaccine with confidence,” , the CDC’s director, said during a recent JAMA Network video interview.

“This is a critical year for us to try to take flu as much off the table as we can.”

Redfield previously stated that the combination of the flu and COVID-19 could make fall 2020 the worst ever experienced in the United States from a public-health perspective.

“COVID-19 has stretched our resources beyond anything we were prepared to handle,” said Syed. “It won’t take much of a flu season to push an already strained healthcare system over the edge into the abyss.”

However, Dr. Charles C. Bailey, the medical director for infection prevention at St. Joseph Hospital and Mission Hospital in Southern California, told Healthline that COVID-19 could make the public “take the risk of flu more seriously, which should benefit compliance with vaccination and other preventative measures.”

The annual flu season typically begins in October and peaks between December and January. Bailey said that between COVID-19 related precautions and lessons learned in the healthcare system, a ‘bad flu season’ does not appear to be evolving thus far.

Achieving a 65 percent vaccination rate, as the CDC wants, would be unprecedented. But it still would be at the low end of what would be required to achieve herd immunity against influenza.

Similarly, say that it will take at least 60 to 70 percent of the population being infected to achieve herd immunity for COVID-19 — assuming that getting sick once with the novel coronavirus confers lasting immunity, something that has not yet been definitively proven.

Frank Sloan, PhD, a study co-author and a health economist at Duke University’s Sanford School of Public Health in North Carolina, cautioned that herd immunity “probably has never been achieved with respect to flu,” although “it has been achieved for some other infectious diseases.”

The study authors called for a concerted public health campaign to increase flu vaccination rates, especially among the at-risk populations identified in their research.

“Flu shots need to be readily available without a major time commitment on the part of the potential recipient,” said Sloan.

“Employers should provide them. Pharmacies should be encouraged to promote them. There have been improvements on this score. More pharmacies are located in supermarkets where people shop for food than previously.”

The researchers said educational campaigns are needed to overcome myths about the risks of vaccines. They added that mandated vaccination should be considered in certain settings, such as for school populations and in the workplace.

The Washington Post reported this week that Dr. Scott W. Atlas, a neuroradiologist from Stanford University’s Hoover Institution in California and a member of the Trump administration’s COVID-19 task force, has been advocating that the United States shift from a prevention and containment strategy to allowing the novel coronavirus to spread in an effort to achieve herd immunity.

That would be a fatal mistake, said Sloan.

“We don’t want to achieve herd immunity for COVID without an effective vaccine,” he told Healthline. “There would be too many deaths along the way.”