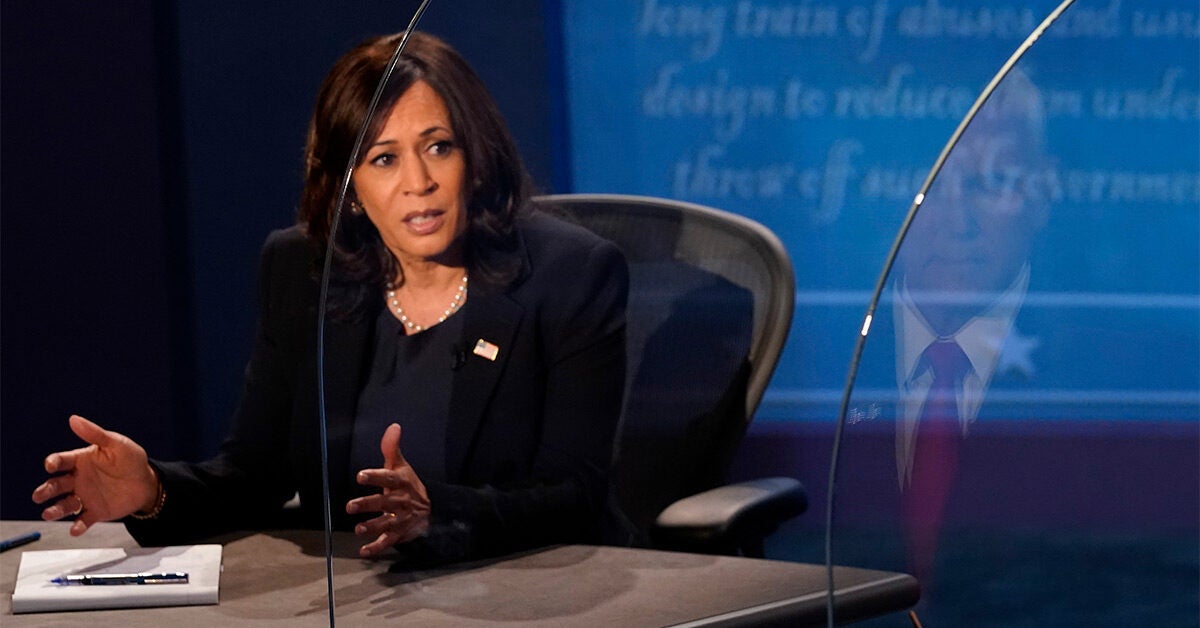 “210,000 dead people in our country in just the last several months,” said Harris. “Over 7 million people who have contracted this disease. One in five businesses closed.”

While Pence, who is chair of the administration’s coronavirus taskforce, defended the White House’s record, he failed to address specific decisions made for handling the current crisis.

“Our nation has gone through a very challenging time this year,” Pence responded. “But I want the American people to know that from the very first day, President Donald Trump has put the health of Americans first.”

COVID-19 has fundamentally altered how we live our lives, and that fact was made obvious by changes in how this vice presidential debate was conducted.

Pence’s team initially objected to using the transparent barriers, reported ABC News, although the vice president ultimately did agree to use safety measures.

An aide to Pence told ABC News that, “if such a barrier’s critical for the Harris team, then we’re not going to let it stand in the way of having that conversation about the future of our country.”

As with the presidential debate, Harris and Pence did not shake hands as a safety precaution.

Harris emphasized what she said was the Trump administration’s initial failure to take the pandemic seriously, accusing both Trump and Pence of a cover-up.

“Whatever the Vice President’s claiming the administration has done, clearly it hasn’t worked,” said Harris. “When you’re looking at over 210,000 dead bodies in our country, American lives that have been lost, families that are grieving that loss.”

She also confronted Pence regarding how Americans can be expected to comply with federal and local guidelines to prevent spread of COVID-19, when the White House is apparently not enforcing them.

“Vice President Pence, you in the front row in a Rose Garden event 11 days ago,” pointed out Harris. “At what seems to have been a superspreader event for senior administration and congressional officials, no social distancing, few masks, and now a cluster of coronavirus cases among those who were there.”

At least 10 people who attended that event have since tested positive for COVID-19.

Page told Harris that, even if a COVID-19 vaccine is released soon, the next administration will face hard choices. The moderator then asked, “What would a Biden administration do in January and February that a Trump administration wouldn’t do?”

Harris responded, “Our plan is about what we need to do around a national strategy for contact tracing, for testing, for administration of the vaccine and making sure that it will be free for all.”

She insisted that should a viable vaccine become available before the November election, she wouldn’t hesitate to take it.

“If the public health professionals, if Dr. Fauci, if the doctors tell us that we should take it, I’ll be the first in line to take it,” said Harris.

“Operation Warp Speed, we believe, will have literally tens of millions of doses of a vaccine before the end of this year,” said Pence.

The Affordable Care Act and in particular its provision that requires insurers to cover people with preexisting medical conditions also produced a heated exchange.

Harris pointed to the fact that the U.S. Supreme Court next month will hear arguments on the White House’s attempt to strike down the program known as Obamacare as unconstitutional.

She said that would leave up to 20 million people with preexisting conditions vulnerable.

Pence responded by saying the Trump administration has plans “to improve healthcare and protect preexisting conditions for every American.”

He also criticized the Affordable Care Act in general.

“Obamacare was a disaster,” Pence said. “The American people remember it well.”

Although both candidates spoke on the most serious healthcare issue facing our nation, they neglected to address critical problems that predate the pandemic.

“[It] has given large employers a renewed sense of urgency to address the long-standing problems of high costs, poor quality, uneven access to care, and a lack of equity in our healthcare system.”

Mitchell added that these employers want policymakers to play their part in addressing all of these issues.

“What’s needed is less talk and more action making the changes we know will both strengthen American businesses and better enable them to offer their employees the health benefits they deserve,” she said.

“Each party has different views on how to tackle some of healthcare’s biggest problems and how big a role the government should play in doing so,” said Mitchell.

However, regardless of which party wins the White House, she emphasized, “We stand ready to work with policymakers and stakeholders to strengthen our healthcare system.”

Page presented Harris and Pence with concerns regarding the ages of each presidential candidate.

She focused specifically on the fact that come January 20, either one of them could be vice president serving under the oldest president in U.S. history.

Donald J. Trump will be 74 on Inauguration Day in January. Joe Biden will be 78.

When asked if he’d spoken about or reached an agreement with President Trump about safeguards or procedures regarding presidential disability, Pence deflected by speaking on the unprecedented speed a vaccine will be made available to the American public.

“Because the reality is that we’re going to have a vaccine, Senator, in record time, in unheard of time, in less than a year. We have five companies in phase 3 clinical trials,” said Pence.

Asked the same question, Harris instead spoke on topics that included her record of public service and immigrant background.

“I was elected the first woman of color, and Black woman, to be elected attorney general of the state of California, where I ran the second largest department of justice in the United States,” said Harris.