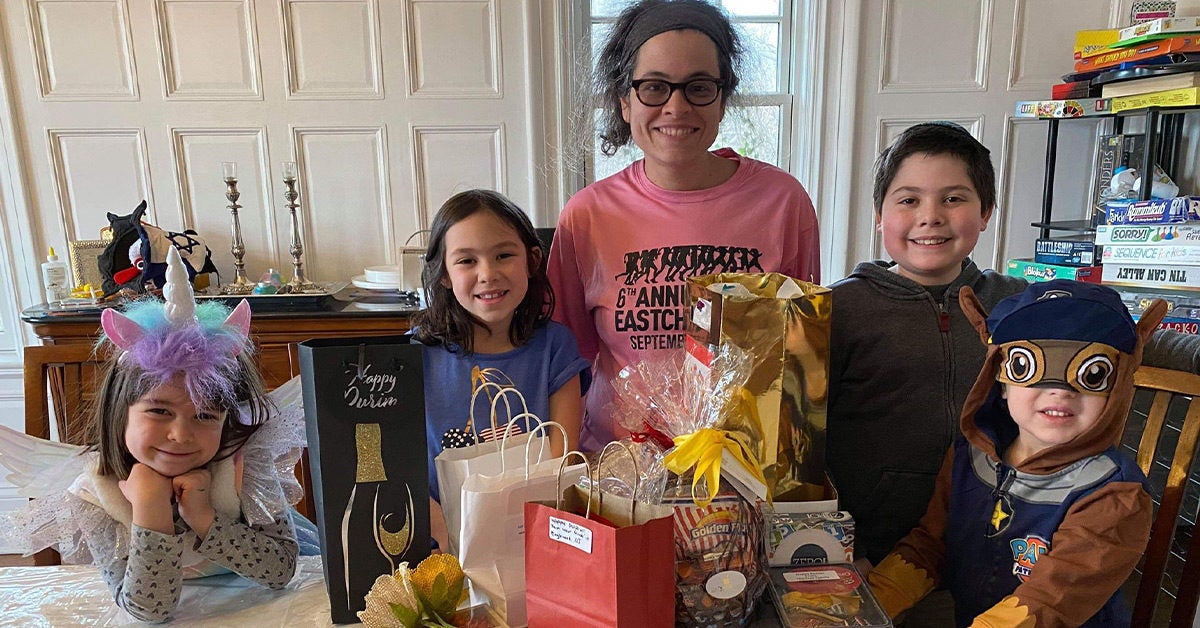 Two families in New York discuss what life is like when you can’t venture into public.

Tamar Weinberg has lost track of how many days she’s been in quarantine with her family at their home in New Rochelle, New York.

Her neighbor, Ariella, a teacher at the Jewish day school SAR Academy in the Bronx — which is temporarily shut down due to the novel coronavirus — has also been in quarantine with her husband and five kids. She requested her last name not be used.

She, too, feels like the days have started to blend into one another.

“I’m making myself breakfast at 3 in the afternoon. I said to my daughter, ‘I feel like I just made this omelet’ and she’s like, ‘No, you made an omelet last night’ and I’m like, ‘Are you sure I didn’t have one today!’” Ariella said.

Since March 3, Ariella and Tamar — who both live in New Rochelle and are members of the synagogue Young Israel of New Rochelle — have been part of the quarantine mandated to people who’d possibly been in contact with a man in their synagogue recently diagnosed with COVID-19, the disease caused by the novel coronavirus SARS-CoV-2.

The quarantines may seem strict, but they’re essential in preserving the health of our communities, preventing the spread of the virus, and protecting those who have a higher risk for severe illness, according to Dr. Alan Koff, a clinical infectious diseases fellow at Yale School of Medicine.

Because SARS-CoV-2 spreads easily from person to person, Koff said, “The more contact that occurs between a patient who is infected and with others, the more likely that transmission of the virus will occur and new cases will appear.”

Since the local schools shut down at the start of the quarantine order, Ariella has continued virtually teaching her 9- and 10-year-old students through the video conferencing platform Zoom.

She and her colleagues have been working around the clock to perfect how they teach in a virtual setting. They’re ensuring their internet is up to speed and that every child has a device to continue with their studies. (People who aren’t quarantined drop off devices to quarantined kids who need them.)

Overall, the new approach to schooling has been a mixture of digital Zoom classes, Google assignments, and activities that are posted, including phys-ed exercises.

They’re also hosting virtual classes for parents, guest speakers, and cooks who digitally demonstrate how to prepare meals — any and everything to keep the kids busy.

“The coordination that’s going on a school level is just unbelievable,” Ariella said. “And not just that, but it’s added structure to their day.”

They’ve also needed to get creative with how they exercise.

Ariella’s family does laps around their house and plays on their basketball court — all underneath media helicopters that have been filming the area from above.

“My kids were jumping up and down and waving, but then you realize, like, wait, they’re looking at us because we can’t leave anywhere. We’re trapped here,” Ariella said.

Tamar has replaced her neighborhood jogs with laps around her driveway (which, she notes, is up to 100 feet away from the sidewalk).

“I almost die of boredom, but that’s what it is,” Tamar said.

There wasn’t much of a heads-up before the quarantine set in (schools shut down the morning of the 3rd, and the quarantine was announced that night), so most families didn’t have time to stock up on food.

Ariella was out running errands when she got wind of the quarantine. She scooped up some goods at a grocery store on her way home.

She also ordered some items through an online grocery delivery service — and is hoping they’ll arrive as planned later this week.

Tamar, who admits she “does not cook,” says her family has relied on local restaurants.

They’ve teamed up with other quarantined families in the neighborhood who’ve put in bulk orders at restaurants delivering meals.

The meals aren’t free, so the costs do add up. And there’s little to no interaction with those delivering the food.

“We cannot interact with the driver. [The driver] comes up to the house, rings the doorbell, drops it off, then goes on,” Tamar said.

Upcoming events in Westchester County have been put on hold or canceled.

Ariella’s son, who’s turning 13, had a bar mitzvah planned in Israel next week.

He’s been studying for 2 years for the celebration, but the trip will need to be postponed until COVID-19 activity settles down.

Neighbors and friends are asking what they can do in the meantime to make up for lost plans. The best thing to do, it seems, is wait.

“I don’t even want to go there because I don’t know what’s gonna be tomorrow,” Ariella said. “I’m not going to plan just so we can be disappointed again.”

Among all the chaos is an outpouring of support from neighbors and friends.

“I have so many friends from neighboring towns calling and seeing if they can pick up things for me,” Ariella said, adding that there’s a local sign-up sheet in which people can help out people in quarantine.

One of her sons, for example, recently got sick and a fever spiked. A friend picked up a prescription for him.

Those in quarantine have also turned to each other for emotional support and solidarity.

They’ve created a text thread on the messaging platform WhatsApp to share new information and laugh about the situation.

“It’s been humbling,” Ariella said of how much the area has come together to help.

Figuring out how to live under quarantine hasn’t been easy.

“I wake up in the morning and I’m like, the nightmare’s really happening,” Ariella said.

The news hasn’t been coming out clearly or efficiently, so the families in quarantine are largely left in the dark.

Most of what they’ve learned has been from the news conferences on TV.

When the 1-mile containment area was ordered by Gov. Andrew Cuomo on Tuesday, Ariella says many people in the community started calling each other, asking, “What does containment mean? Why does it make sense that we’re shut down?”

Other updates have come from the schools and synagogue. But even then, news has been sparse. According to Ariella, it seems they’re not having an easy time getting new information either.

The Centers for Disease Control and Prevention (CDC) has declared that self-quarantines should last 2 weeks — which means both Ariella and Tamar have a few more days in isolation.

“At this time, the recommended amount of time for self-quarantine for asymptomatic persons after exposure to someone with the virus is 14 days,” Koff said, adding that if a person has no symptoms after 14 days, they’re most likely in the clear.

Still, no one in quarantine really knows what will happen next.

Will the quarantine order be lifted? Will it remain? The National Guard is being deployed to New Rochelle this week to distribute food and disinfect buildings.

Soon, we’ll likely see more quarantines ordered across the country as the number of COVID-19 cases picks up.

“We can expect that new areas of quarantine may be implemented, as they are one of the most effective means for preventing the spread of the virus,” Koff said.

There will be inconveniences and challenges with quarantines — including work obligations, financial concerns, and caring for loved ones — that will need to be solved, according to Koff.

For now, people who’ve already been quarantined are taking it day by day and focusing on the fact that they’re safe.

“It does feel like there’s chaos around us, but we are home, we are safe, and there is peace here,” Ariella said.

Life in quarantine means school is being held virtually and people are relying on food delivery for meals. They’re canceling all their social plans and doing laps around their yard for exercise.

Mostly, they’ve been left in the dark with limited updates regarding their quarantine.

Amidst the chaos, though, there’s been an outpouring of support from neighboring communities.