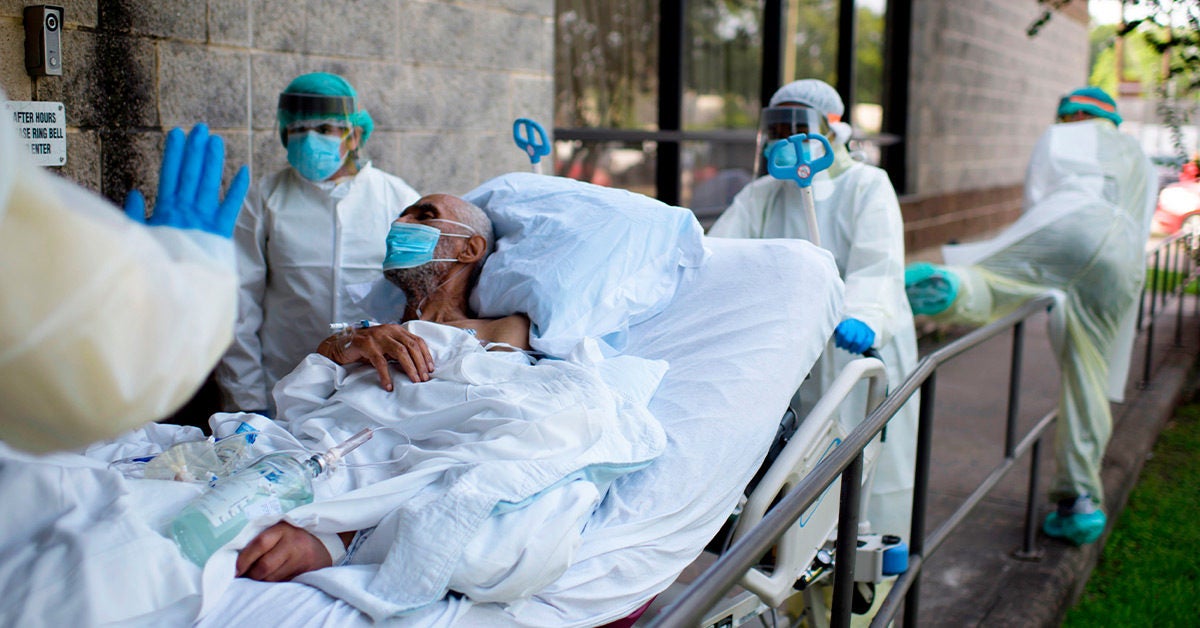 Months after the COVID-19 outbreak peaked in New York, states in the South and West, including Florida, Texas, and California, are seeing new surges of disease.

These states had the benefit of being able to prepare for a COVID-19 surge for months and learning critical lessons from how New York was affected by the viral outbreak.

However, according to the most recent data, many hospitals in these states are starting to be strained. Texas has seen a spike in cases that has reduced ICU bed availability to just 4 percent. And several other states have seen similar rises.

If the situation isn’t brought under control soon, the United States could have a repeat of the dire circumstances experienced in New York City, when medical resources were insufficient to help everyone in need.

Hospital ICUs were full at 54 hospitals across 25 of Florida’s 67 counties, reports Reuters.

In the last 4 weeks Texas, Arizona, and South Carolina have seen their COVID-19 death toll rise by over 100 percent, reports The Washington Post, while Mississippi, Tennessee, California, and Louisiana have also experienced a significant increase in infections.

Medical facilities across the United States insist they’re prepared for a resurgence of COVID-19.

In California, tents have been set up to deal with a potential rush of new patients.

“When you see us panic, you’ll know,” Scott Rocco, emergency department manager for Santa Rosa Memorial Hospital in California, told the Press Democrat, standing outside a tent with six medical bays, ready for a new wave of patients.

Although some hospitals in Florida have no adult ICU beds available, according to state data, a spokesperson for one of Central Florida’s largest healthcare providers says they can expand capacity as needed.

“Our ICU capacities are running at about 85 to 90 percent, but we have the ability to turn some of our progressive care units into ICU units if we need to do so,” Terry Shaw, CEO of AdventHealth, said in a statement.

Austin, Texas, has established a “surge plan” that’s activated once traditional hospitals have reached capacity. Under this plan, patients will receive hospital-level care in buildings that formerly housed clinics or medical facilities.

If these fill up, then patients would be treated in facilities similar to combat surgical hospitals or large wards.

Rondello emphasized that there are no easy answers for how to prepare for a wave of patients with COVID-19, but lessons can be learned from the experiences of hospitals that were hit hard and early, not just in this country, but around the globe.

“Now that available supply has begun to better meet U.S. needs,” explained Rondello, “many states and health systems have begun to stockpile what supplies they can — anything in excess of their current burn rate.”

He said there is “hope” that the stored supplies will be sufficient for the spike in cases expected this fall. But, “Unfortunately, most of the underlying supply chain issues, such as 95 percent of all N95 masks used in the United States being manufactured overseas, have not been resolved. That remains our supply Achilles’ heel.”

“What we are seeing with this virus is that there are huge regional variations in approaches — this also holds true for hospital preparedness,” said Dr. Tista Ghosh, epidemiologist and medical director of Grand Rounds. “Given the vice president’s recent suggestion that healthcare workers reuse PPE, it is certainly possible that shortages still exist in various parts of the country.”

Ghosh recommended healthcare facilities in areas experiencing a surge in cases should consider canceling elective procedures “to free up both beds and ventilators.” They should also be prepared to use “pre-identified, alternate care sites,” like Central Park in New York City, if needed.

When asked if the recent spike in COVID-19 cases is the second wave of infections, Ghosh replied, “Not yet — this is still the first wave for many places.”

She explained that Texas and Florida, for example, “didn’t experience a first wave when New York City did. Instead, they are experiencing it now.”

Ghosh said we should expect “regional variation in viral circulation and spikes in cases, based on policies, travel, population density, and so on.” That means when certain parts of the country experience a second wave, other areas will still be in their first.

“The fall and winter may prove challenging for the healthcare system, as both COVID-19 and influenza will likely be impacting people and requiring healthcare resources,” concluded Ghosh. “How bad it gets will depend on us as a society.”

She emphasized that the only tools we have right now are physical distancing and hygiene and mask use. “Whether we use those tools en masse or not will determine how bad the fall/winter is.”

Rondello agreed: “What is occurring now is not a second wave of infections — it is merely a continuation of the first wave.” He said many epidemiologists, including him, had hoped that the national rate of infection would decrease “substantially” during the summer, “providing an opportunity to regroup before the expected second wave in the fall.”

However, he added that while case counts dropped in heavily hit regions of the country that adopted “strict, early, continuing precautions,” the skyrocketing number of cases elsewhere in the United States offset the benefits of that decrease.

“Ultimately, regardless of the first wave/second wave semantics, we can expect to continue to see various regions of the country with huge spikes in caseload,” said Rondello, such as “those areas that have aggressively reopened before achieving the key recommended milestones or universally adopting best practices in infection control.”

The rise in cases during summer, which typically sees few cases of respiratory infection, also raises troubling questions about cold weather, just a few months away.

“No one can say with certainty how bad the fall caseload will be, but most of us in public health remain convinced that it won’t be good,” confirmed Rondello. He explained that coronaviruses, like SARS-CoV-2, tend to flourish in cooler weather. “People spend less time outdoors and congregate inside where transmission is more likely.”

“COVID-19 continuing alongside the arrival of flu season can only worsen the situation,” he warned. “Individuals’ immune systems can only accommodate so much at one time, and fighting against two severe respiratory pathogens simultaneously will for some be more than they can bear.”

According to Rondello, patients with severe influenza will increase the demand for hospital beds and other healthcare resources at the same time that COVID-19 cases are expected to rise.

Months after the COVID-19 outbreak peaked in New York, states in the South and West are seeing their own spikes of disease.

Recent increases in COVID-19 across several U.S. states have raised concerns about a second peak and an overwhelmed medical system.

Experts say that the spike in cases is actually a continuation of the first wave and that hospitals should have enough supplies — for now.

They warn that if physical distancing and mask use guidelines aren’t strictly followed, a combination of COVID-19 and seasonal flu this fall could have dire consequences for the medical system and many vulnerable people.