How Barbers Are Stepping Up for Black Men and Mental Health 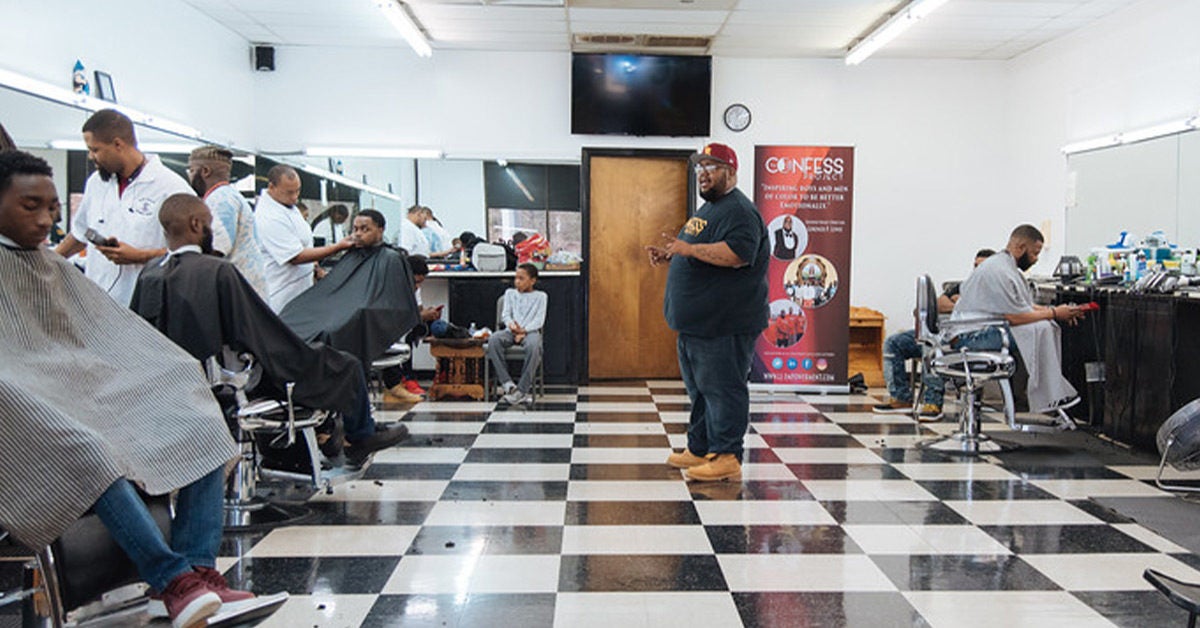 Lorenzo P. Lewis was born while his parents were incarcerated. At birth, his aunt was declared his legal guardian. When he was 10 years old, his father died from substance use.

“My being born in prison was a symptom of generational trauma. Across both sides of my families, I have several family members who were incarcerated and who had substance abuse. I believe trauma evolves over generations and doesn’t just happen to one person,” Lewis told Healthline.

While his aunt was an involved caregiver and provided the basic needs of food and shelter, he said the emotional distress he experienced from being disconnected from his parents and siblings manifested into trauma.

As a child and teenager, Lewis struggled with educational, behavioral, emotional, and physical distress, including obesity. He also experienced anger, irritability, anxiety, and depression, but wasn’t diagnosed with major depression until his 30s.

“I also experienced racism in schools early on around the time my dad died. [Shortly after], I had to spend 3 months in a behavioral health facility, which was a big shift in how I view the world,” said Lewis.

Stigma kept him from getting help.

“My family never wanted to think anything was wrong. Part of what we face as a community is the stigma around mental health. We want to put it to religion or self-determination, but there’s a [bigger] need to really deal with mental health,” Lewis said.

Stephanie E. Johnson, owner of NaviPsych and executive director of the Lee Thompson Young Foundation in Atlanta, Georgia, said barriers to mental healthcare vary from personal to sociocultural to socioeconomic.

In her experience of working with Black men diagnosed with severe mental illnesses, such as schizophrenia and bipolar disorder, Johnson said they often tell her that they knew something was wrong, but note the following as barriers to getting help:

“This is indicative of the deep systemic issues aside from lack of African American male mental health service providers in the field, the prevalence of African American men who are often jailed as opposed to hospitalized while experiencing symptoms of severe mental illness, and the lack of psychiatric services in rural areas of the country,” Johnson told Healthline.

Laura Danforth, PhD, licensed clinical social worker and assistant professor of social work at the University of Arkansas at Little Rock points out that only 4 percent of mental health professionals are Black.

“As a white woman, I know that I can go to a mental health provider who will likely have a similar cultural background as me, and who will likely understand my lived experience. A huge barrier is not only access, but also being able to sit across from your therapist and have them hear you, see you, believe you, and understand your pain,” Danforth told Healthline.

As a teen, Lewis got involved with a gang. After one of his friends was jumped at a basketball game, he retaliated by getting a firearm. However, before he could use it, police intervened and Lewis was charged with a felony gun charge and served 3 months in prison.

“Prison was a very uncomfortable and degrading experience. I wanted to get out bad. I wanted to break the cycle of incarceration in my family. I wanted to be better and do better,” said Lewis.

The judge on Lewis’s case asked what he wanted to do with his life. He said her question and compassion for giving youth a second chance changed his trajectory.

“I told her I wanted to go to college, get into criminal justice, and do good,” he said.

The judge deemed his charge a misdemeanor and Lewis was placed on probation.

He kept his promise to the judge and in 2007, he attended the University of Arkansas at Pine Bluff. Although he didn’t go into criminal justice after graduating, he went on to obtain a master’s degree in public administration in 2015.

While receiving his education, Lewis sought out therapy to address his mental health and also worked in psychiatric hospitals and behavioral homes for children.

“I was compelled by the people I’d meet who had relatable stories to mine. I felt such compassion for them and saw their potential. I saw how I could really be a part of breaking the stigma and understanding the issues Black men face,” said Lewis.

The inspiration for his nonprofit, The Confess Project, was born in May 2016.

As a national grassroots movement committed to building a culture of mental health for men of color, The Confess Project aims to train educators and mental health professionals to understand the cultural and racial support that men of color need.

A big component of the project is utilizing barbers to connect with men of color.

“Barber shops have been used for social justice back to the civil rights era, and there is a lot of historical context around the barber shop, so I took this history, my childhood, and path, and extended it out to help barbers be advocates in their community,” said Lewis.

According to a 2019 data conducted with the University of Arkansas Medical Sciences College of Public Health, of 73 barbershop participants, 58 percent said they would receive mental health therapy if it was located in a barbershop.

The initiative began in Arkansas and has expanded across cities in the United States.

Through a 12-month curriculum, barbers get trained on active listening, validating clients’ emotions and concerns, and how to use positive language to combat stigma around mental health. They also learn about mental health resources in their area to which they can direct clients.

“There is confusion of where to go for services and how to access them. Barbers know their clients and can help. They can be leaders and mental health advocates in their community in nontraditional, hands-on ways. They’re not counseling clients, but supporting them, listening to them, and sharing resources so they can get the help they need,” said Lewis.

Johnson said research indicates family support, social support networks, and education are the primary reasons that people go to and remain in mental health services when they need them.

“I applaud The Confess Project for their efforts to have these conversations among African American males. There are layers to destigmatization that are specific to African Americans and the best way to engage in these conversations is in safe, trusting environments as well as with the appropriate facts about psychological and psychiatric health as well as brain health,” said Johnson.

Danforth agreed, noting that The Confess Project places the power, control, and choice about how to talk about mental health into the hands of Black men.

“When you have a space that is for you, by you, you have ownership in that and likely feel safer to be transparent and open about what’s going on in your world,” she said.

In 2018, The Confess Project toured seven southern and Midwest cities. According to the organization’s study, 91.3 percent of all participants stated that they were better informed of mental health than they were before the sessions.

In 2020, the project partnered with Gillette and its “The Best Men Can Be” grant fund to connect with barbers across 16 more states.

“Early on, a lot of barbers walked away because of the stigma, and we had to fight a few years to normalize it. Now, we built a lot of momentum and have a few celebrity barbers who help us build relationships. With Gillette as a partner, we’ll continue to evolve,” said Lewis.

Johnson hopes programs like Lewis’s continue to increase the attention on mental health and the overall psychological well-being in the United States.

“American citizens must continue to be vigilant at demanding our country become healthier by connecting the dots between culture, politics, education, socioeconomics, and health — all of which strongly affect our mental health,” she said.

Lewis plans to keep doing just that. He aspires to continue connecting with men of color across the country and internationally on the grassroots level.

“There is a big lack of understanding of the Black male experience, and so many people who work in academic and clinical settings may not be as educated as needed about how Black men show up in work, school, and social groups,” he said.

During these turbulent moments of racial discrimination, he hopes mental health professionals step up and support Black males.

“When you consider the high rate of Black youth suicide, lack of support and funding for Black lives, and the medical distrust that comes with that, there is a lot of work that needs to be done,” he said.