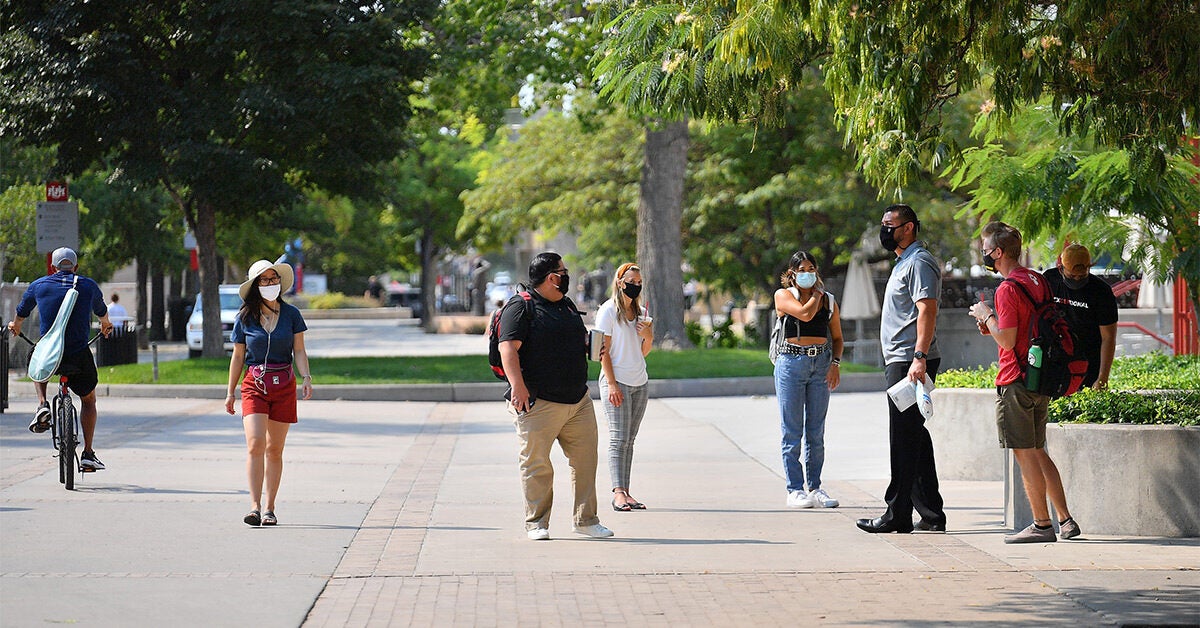 Many colleges around the country are reopening to in-person classes amid the COVID-19 pandemic.

Many are closing again just as quickly.

At the University of Notre Dame in Indiana, nearly 12,000 tests of undergraduate and graduate student populations yielded just a 0.28 percent positive test rate before classes started.

Eight days after students returned to campus, the positivity rate had jumped to nearly 16 percent.

That prompted the school to switch to virtual learning for 2 weeks. The college intends to start phasing in in-person classes again tomorrow with more stringent, frequent, and randomized testing of the student body and tighter restrictions on social gatherings.

It’s a similar refrain at other colleges and universities.

The University of Alabama has likewise seen more than 1,000 new positive cases in its first 2 weeks since the college reopened.

The University of North Carolina at Chapel Hill opened in-person for a week and then promptly went fully virtual for the fall semester after 135 positive cases blossomed from August 10th to 16th.

Positive cases at UNC now sit at more than 1,000 for the month of August.

All told, more than 26,000 cases of COVID-19 have been reported among students and staff at more than 750 colleges and universities in the United States as of September 1, according to a New York Times coronavirus tracker.

The spikes in cases pose serious questions about whether colleges should be opening at all and when they do see cases increase, what to do about it.

On the whole, students who have come down with positive COVID-19 tests at these colleges have experienced mostly mild symptoms, but that doesn’t mean they can’t spread the disease to more vulnerable populations.

“If I’m an elderly person in Tuscaloosa right now [where the University of Alabama’s main campus is], I’m scared,” said Dr. Howard Forman, a professor of public health at the Yale School of Medicine in Connecticut. “Because my 30-year-old grandson who went to a bar with the undergraduate and graduate students comes home and starts spreading it to his parents who spread it to me — and next thing you know, 75 or 80-year-old me is infected.”

“The relative prevalence of cases and a lot of these college campuses is higher than the surrounding area and that worries me a lot,” Forman told Healthline.

That dynamic could also spell trouble for sending students home after schools had initially opened in-person. There is the potential that students could return to their communities with the infection and contribute to new waves of the pandemic.

At places like Auburn and Alabama, where college football reigns supreme, the desire to return to sports brings additional pressures and complexities.

Auburn University, for instance, already has 16 football players sidelined with either positive COVID-19 tests or in quarantine for close exposure.

Meanwhile, Iowa State University just announced that it would be allowing 25,000 season-ticket holders to attend its home football game on September 12 against the recommendations of its local county board of health.

Previous data from earlier in the pandemic shows that these types of crowded stadium gatherings have the potential to turn into superspreader events.

Forman said the problem isn’t so much having people together outdoors — where the danger of spread appears relatively limited, especially while masked — but how people get to and from their destinations.

“Most people don’t walk to the stadium and when they get to the stadium they don’t just magically transport themselves to their seats,” he said. “Most people go to a bathroom at some time during an event. And so you always have to ask yourself: How likely is it that you could turn up at a urinal next to somebody else who is infected in an indoor space where social distancing becomes almost impossible? How likely is it that when you’re marching through the tunnels of the stadium to get to your seats or leaving the stadium, will you find yourself in a mass of people in a relatively small space?”

“So that’s where I get concerned and that’s why I think every football stadium, every fall event has to be thought of really differently,” he added. “Not to mention the fact that the football players themselves are just spitting in one another’s faces.”

None of this means that reopening colleges and universities is impossible, but it does mean that not all things that were formerly part of college life can remain so amid a pandemic.

“You know nobody should pretend that they know how to make this work because we’ve never done this before. And there is no simulator to tell you what 18- to 22-year-olds do under this particular scenario,” Forman said.

Notre Dame, for its part, is taking the approach of drastically increasing testing as well as banning social gathering of 10 or more people or any event in which health precautions aren’t being strictly observed.

Ultimately, universities may have to invest in testing students far more frequently, especially as outbreaks occur, and planning to have students quarantine in place.

“Then you’re not relying just on masks and social distancing and people complying with every possible rule because you’re actually taking the reproduction number down dramatically just by improving the testing mechanism,” Forman said.