How to Safely Dine at Your Favorite Place 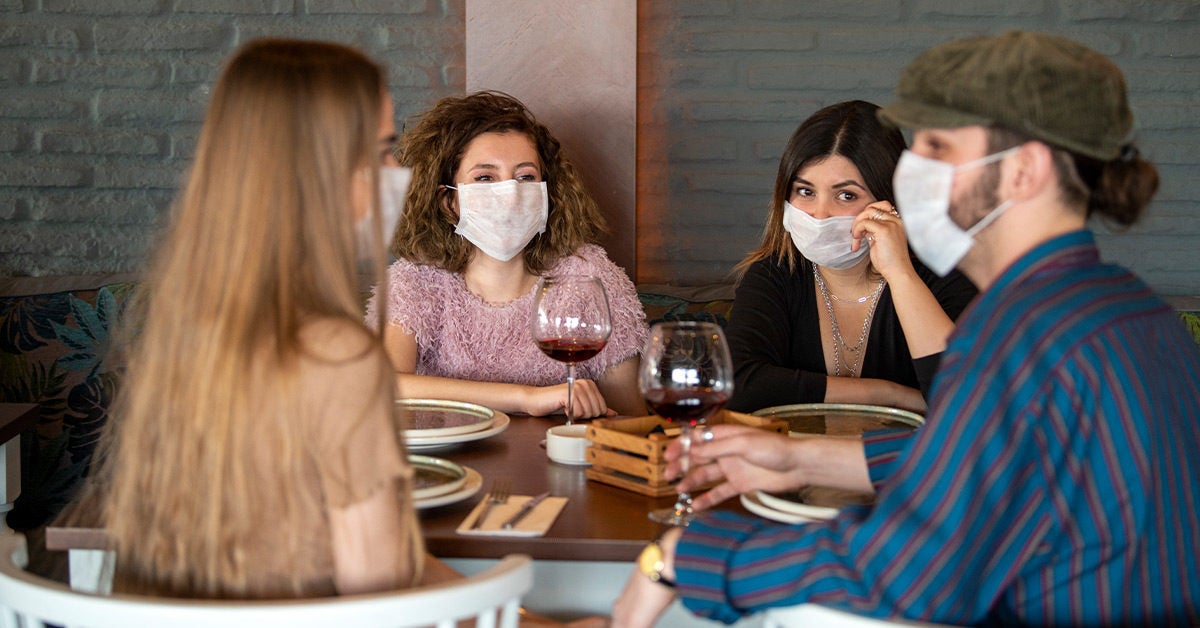 The restaurant dining experience as we once knew it is now gone.

In the age of COVID-19, it has been replaced with 6-foot spacing between tables, pumps of hand sanitizer, disposable menus, and masks for customers and employees.

“I’m going overboard with this,” said Erik Pettersen, executive chef at Evo Italian in Tequesta, Florida, of his restaurant’s new safety measures. “It’s making people feel comfortable because they’ve been, we’ve all been home, watching the news, and listening to these terrible statistics coming in every day.”

The business owner told Healthline he “didn’t pull any pull any punches” when it came to implementing safeguards in advance of his reopening on May 12.

“I searched the internet and ordered sanitizer. I said, ‘I’m not going to be that guy that opens his doors and doesn’t have one on every table, dispensers every 20 feet for people, and in bathrooms.’”

But are precautions like these — and other measures, such as capacity limits, disposable utensils, contactless payment, and staff temperature checks — enough to make dining out completely safe?

As deaths in the United States soar above the 100,000 mark, we asked experts whether it’s safe to venture out to your favorite eatery for a bite to eat with a side of normalcy.

If you’ve been longing for activities of your previous life, you’ve likely considered the risks involved with each.

Eleanor J. Murray, ScD, an assistant professor of epidemiology at Boston University in Massachusetts, rattled off factors to think about in regard to transmission risk at a restaurant.

“How much time you spend in proximity to other people, how close of proximity you are to them, whether you’re in sort of an indoor space versus a more ventilated or outdoor space, and how physically crowded you are and how much of that crowding is with people that you don’t typically come in contact with,” she explained. “Restaurants hit potentially all the worst side of those things.”

The safety measures you’ll see in restaurants will not eliminate risk.

“They are likely to decrease the risk,” Murray told Healthline. “Whether they’re good enough to make it not risky at all, I don’t think that’s the case. I don’t think there’s any way to make dining out a completely risk-free experience.”

Murray said it would be reasonable to eat at a restaurant outdoor patio where tables are spread out 6 or more feet apart so everyone has plenty of space.

“I think that that’s something that could be reasonable to do in a lot of places already,” she said. “Some places probably have too many cases for that to be feasible yet, but I think a lot of places are kind of heading there.”

If you’re in an area where the novel coronavirus is raging, the decision to dine in may not be wise.

Murray suggested looking at the “trajectory” of cases over the past couple of weeks.

“The case counts today will tell you how many people have been tested, but it’s not necessarily going to be everyone who is infectious right now because people can be infectious maybe up to 2 weeks before they even develop symptoms,” she told Healthline. “You want to think about (if) cases have been trending down in your area? Are they getting to a point where they’re low and it’s reasonable to be in a little bit more crowded setting than you were in March and April?”

If you think the risk is worth taking, select a restaurant that is making an effort to keep customers safe by following federal and local health .

“If you’re somewhere where they’ve put the tables exactly 6 feet apart so that if somebody leans back in their chair they’re now closer than 6 feet to you, that’s probably not the best place to be choosing,” Murray said. “You want to look for places that are really trying to go with the spirit of the recommendations and not just the minimum that they need to do.”

He said a “large, open, and ventilated” space is preferred — outdoors, if possible.

“Before dining in a restaurant, the big question to ask is, simply, ‘Do they adhere to social distancing?’” Berger told Healthline. “Before sitting down and asking for a menu, check to confirm that the restaurant staff is wearing masks, and that these masks cover their noses and mouths.”

Contact with others or contact with areas where many others have been, such as bathrooms, are potential risk points, Murray said.

Therefore, it’s advised that you choose your restaurant wisely.

“At some point in the chain, someone has to touch it, so this is why you want to look for restaurants that are really committed to infection control and giving their employees sick leave, so they’re not working while they are sick, that kind of thing, to make sure that they’re doing the best they can,” she said.

It’s important that your server has frequent opportunities to wash their hands.

“(If) every time someone busses a table they’re able to wash their hands after touching those dishes that had been eaten off of, that will be a good way to ensure that the person bussing the tables is minimizing their risk of getting infected,” she said.

Murray added that employees may be at the highest risk because they’re spending the most time inside the restaurant, so limiting your time in the restaurant is also a good idea.

There’s anecdotal evidence, she continued, that suggests that air conditioning could increase risk of transmission.

Scientists studied an outbreak of COVID-19 among three families that had lunch at a restaurant in Guangzhou, China, on Jan. 23.

“They basically tracked infection in a whole group of people to the fact that they were sitting in tables that were in a row along the route of the air conditioner,” she said. “So I think that’s something that’s important to consider. I know that in a lot of parts of the country it’s not going to be feasible as it gets hotter to be sitting outside.”

It’s an issue Pettersen will be facing as temperatures rise in Florida.

“Today, it’s 96,” he said. “It’s getting to the point by next week that most of the people will come inside. I’ve got a big outside area for them to dine right now, but once it gets too hot, I don’t know what’s going to happen.”

He noted that he has filters in every air conditioning unit and is changing air filters every 2 days.

In the event that dining is moved inside due to rising temperatures, Murray advised that restaurant owners “need to be thinking about even fewer people in the restaurant, even more spacing.”

She urged customers to do the same.

“When possible, it’s probably better to get takeout or delivery rather than sit in the restaurant,” she said.

She also recommended that you think about whether the restaurant bathroom is a place you can avoid.

“Across all the kinds of activities that we do, the one common thread is that restrooms are a potential high point of contact,” Murray said. “We don’t think about the fact that a lot of people when they go to restaurants at some point they use the restroom.”

If you’re in a risk category for COVID-19 or you live with someone who is, you’ll need to decide if dinner at a restaurant is worth the potential for exposure.

“I have an 8-week-old son and we have a 77-year-old grandma in my house. I already take the risk just going to work every day and exposing myself and know that I may bring it home to them,” explained Patrick G. Hughes, DO, director of the emergency medicine simulation program at Florida Atlantic University. “Going out to a restaurant and adding more risk to that is something that at this point in time I’m not really too keen on. But maybe if someone is in a different situation they’d feel differently about that risk.”

Hughes says it’s easy for germ droplets to spread among people sharing a meal at a table.

“The part that we kind of want to drive home is the fact that when you are in public, handwashing is obviously important and then also making sure not to touch your face, or mouth or nose,” he told Healthline.

Hughes stressed that you should consider the amount of time you’re in contact with people during a meal at a restaurant.

“If you’re just at the grocery store and you pass by someone in the aisle, the risk isn’t as high as if you’re sitting in a restaurant for 1 hour, 2 hours, 3 hours, or however long you’re sitting there dining for, without your mask on,” he said. “The main mechanism that it spreads is by respiratory droplets and people dining in a restaurant are not able to control one of the main ways that this virus spreads.”

You can’t wear a mask while you eat, but Murray said bringing it with you can still be a good idea — as long as you’re careful not to touch other objects and then touch your mask.

“If you’re going to wear your mask, you would probably want to take it off, put it in some kind of maybe plastic bag, sanitize your hands, and then start eating or whatever,” she recommended. “Then again sanitize your hands before you put your mask back on.”

In this new dining environment, hygiene is critical.

“Tablecloths, menus, salt shakers, credit cards, chairs, doorknobs, and scores of other objects associated with a restaurant could all be contaminated with coronavirus — but those viruses can only harm us if they get into our bodies,” Berger said. “Bottom line: Scrupulous attention to basic hygiene must extend to utensils, plates, food preparation, and — most importantly — hands (our own and those of the waiter or waitress).”

Most likely, your go-to restaurants have cleanliness mastered.

“Restaurants already do a lot to ensure that they’re operating in like healthy and sanitary conditions,” Murray said. “So I think the back of the house where the staff is mostly interacting with each other, that’s somewhere restaurants have a long history of trying to make that as safe from infectious disease transmission as possible. That is going to be in favor of a restaurant versus some other businesses that don’t normally have to think about that.”

For his part, Pettersen is doing everything he can to keep his customers and staff safe.

But even with patrons returning to his tables, things don’t feel back to normal.