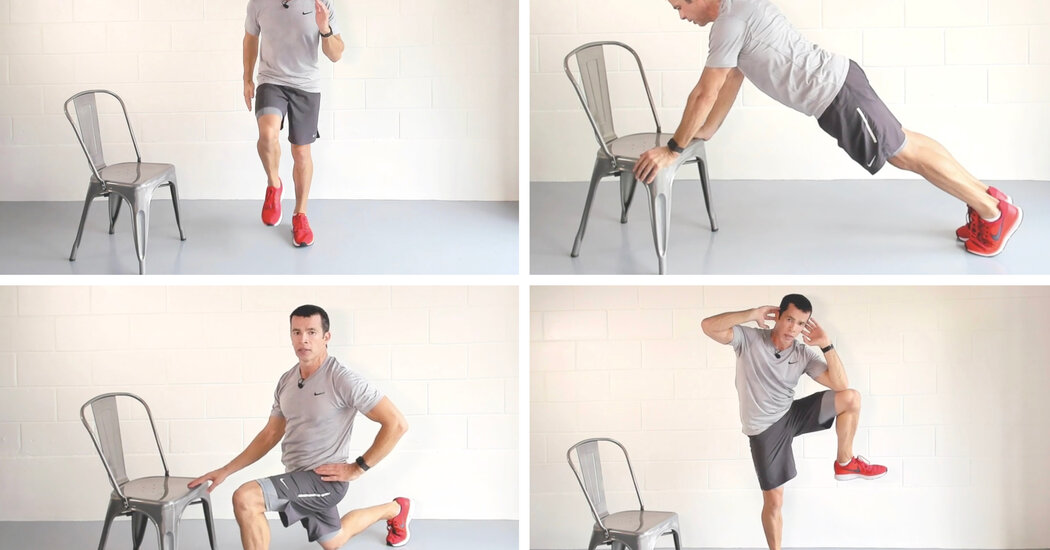 Nearly eight years ago, the fitness trainer Chris Jordan published a simple sequence of 12 exercises in a medical journal.

It was notable because it combined aerobic and resistance training into a single bout of exercise that lasted just seven minutes. “As body weight provides the only form of resistance, the program can be done anywhere,” wrote Mr. Jordan, who has a master’s degree in exercise physiology from Leeds Metropolitan University (now known as Leeds Beckett University) and has provided fitness advice to both the British Army and the United States Air Force.

After The New York Times Magazine wrote about the research, under the headline “The Scientific 7-Minute Workout,” the exercise routine became nothing less than a global phenomenon. Dozens of exercise videos and apps followed.

The original seven-minute workout was based on a training program that Mr. Jordan had developed while working as a civilian fitness program consultant for U.S. Air Force personnel stationed in Europe. Later, while training executives at what is now the Johnson & Johnson Human Performance Institute in Orlando, Fla., he fine-tuned the exercises into what he called a “hotel room workout” for the busy executives who complained they didn’t have the time or equipment to exercise while traveling.

Mr. Jordan, who is the director of exercise physiology at the institute, said he has never made money on the workout and insisted that the Johnson & Johnson Official 7-Minute Workout app be free of charge. “Many people cannot afford to buy a dumbbell or go to a gym,” Mr. Jordan said. “As time goes by, I’ve felt a greater desire and passion around making exercise as accessible as possible to as many people as possible.”

Mr. Jordan created several variations to the workout, so it could be useful to both “my triathlete elder brother and my 82-year-old mother.” But as popular as the workout became, a number of people, particularly those who are overweight, older or have knee and hip problems, found it too difficult to complete. Among the biggest obstacles for some people were five exercises that require getting on the floor — push-ups, planks, abdominal crunches, side planks and a tricky push-up with rotation.

To make the workout accessible to more people, Mr. Jordan recently created the Standing 7-Minute Workout, suited to bodies of any age, size or fitness level. Like the original workout, the standing workout includes exercises for cardio fitness, the lower body, the upper body and the core muscles — in that order. Each exercise lasts just 30 seconds with just five seconds of rest in between. (You can find a video of the workout at nytimes.com/well.) To get the most out of the workout, do each exercise at a relatively high intensity — about a 7 or 8 or on a scale of 1 to 10. But go at your own pace, and stop if you hurt. Always see a doctor before starting a new exercise program.

(30 sec.) March in place: The goal is to get your heart rate up. Raise your knees and pump your arms. Pick up the pace if you can.

(30 sec.) Chair-assist squat: Stand with your back to the chair. Place your feet shoulder-width apart. Now squat by bending your knees and lowering yourself toward the chair and back up. (Don’t sit down!) Keep your arms outstretched to counterbalance you. If you can’t go into a deep squat, just go halfway. (The chair is there for safety in case you lose your balance.)

(30 sec.) Wall push-up: Place your hands against the wall and walk your feet back so you’re leaning at a comfortable angle. Keep your body straight from head to heel, and lower yourself toward the wall and push up against it. If it’s too hard, scoot your feet closer to the wall. If it’s too easy, move your feet farther from the wall.

(30 sec.) Standing bicycle crunch: Stand with feet shoulder-width apart, hands behind your head, elbows out. Lift your right knee and twist to meet it with your left elbow. Now do the opposite — touching your right elbow to your raised knee on the left. As you twist your upper body, crunch the abs. If you can’t touch your knee with your opposite elbow just get as close as you can, bringing the upper body toward the lower body.

(30 sec.) Stand and box. Place your feet shoulder-width apart. Now raise your fists and punch and jab the air like a boxer. The goal here is to get your heart rate up. Punch a bit faster and add a squat if you’d like to make it harder.

(30 sec.) Chair-assist split squat: Stand next to the chair with one leg forward and one leg back. Drop the back leg to the ground and use the chair for balance if you need it. Keep the front knee behind your toes. Switch legs after 15 seconds.

(30 sec.) Chair-assist push-up: Place hands on the chair and walk your feet back so your body is at a 45-degree angle and straight head to heel. Bend your arms and lower yourself as close to the chair as you can. Push back up to the starting position. If it’s too hard, go back to the wall push-up.

(30 sec.) Wall plank: Place your forearms against the wall to take the pressure off your wrists. Walk your feet back to a comfortable angle. Keep your body straight from head to heel, hold the position and feel your abs work. To make it harder, scoot your feet back farther from the wall.

(30 sec.) Stepping jacks: This is a jumping jack in slow motion — without the jump! Start from a standing position with your arms at your sides. Step to the left and lift both of your arms over your head to touch. Return to starting position. Now repeat, stepping to the right. If it’s too easy, pick up the pace or try a regular jumping jack.

(30 sec.) Wall sit: Place your back flat against the wall and slide down into a sitting position with your knees directly above your ankles. Fold your arms. If it’s too difficult, just slide up a little bit. If it’s too easy, lower yourself. You should feel the muscles in your upper legs working hard.

(30 sec.) Wall push-up: Repeat the wall push-up, or if you prefer, you can repeat the chair push-up. You should feel the arms, shoulders and chest working hard as you push away and lower yourself back toward the wall. Keep breathing!

(30 sec.) Standing side crunch: Places your hands behind your head. Now lean to the right, raising your right knee to touch your right elbow. Now lean to the left and repeat, stretching to bring your left elbow to your raised left knee. You’ll feel this exercise in your side abdominal muscles.