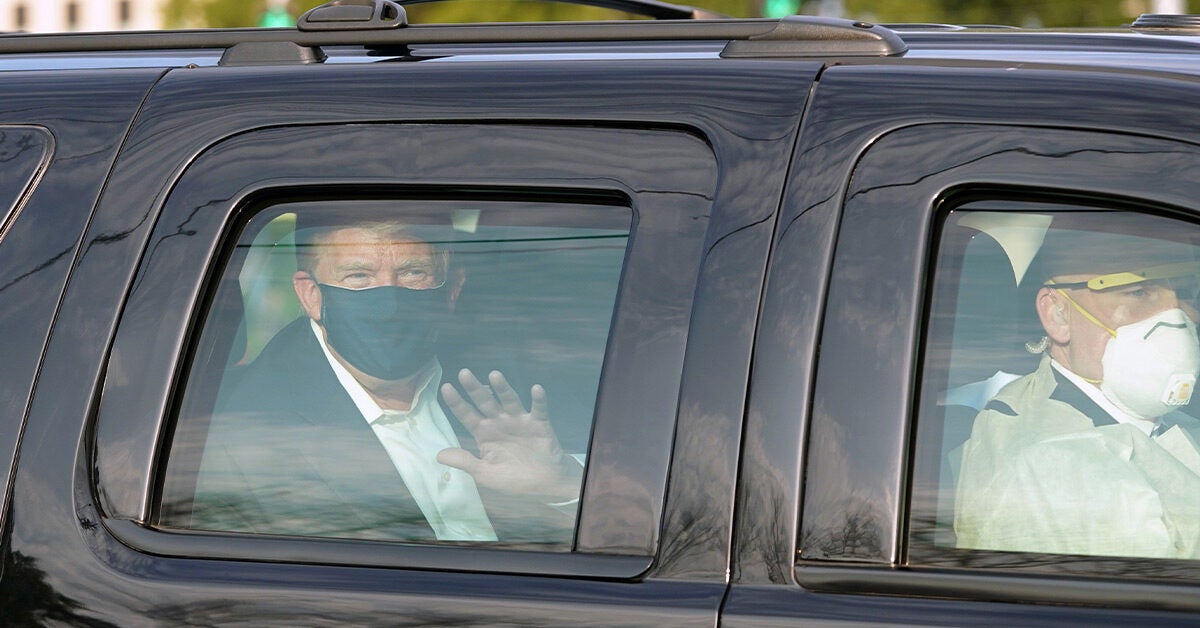 “Tremendous progress is being made and I say it and I’ll say it all the time, we’re rounding the corner.”

That was President Donald Trump at a news conference last Monday, announcing the deployment of 150 million rapid COVID-19 tests.

The following night, during the first presidential debate, he mocked his opponent, former Vice President Joe Biden, for wearing a mask.

“I don’t wear masks like him. Every time you see him, he’s got a mask,” Trump said. “He could be speaking 200 feet away from him and he shows up with the biggest mask I’ve ever seen.”

Then on Thursday, the president tested positive for COVID-19.

By Friday, he was hospitalized, undergoing experimental treatments.

“This virus got to the most protected person on the planet. This virus got through testing protocols that the White House uses and put the president in the hospital,” said Dr. Amesh Adalja, FIDSA, senior scholar at the Johns Hopkins University Center for Health Security in Maryland.

“So, for those people who don’t think this is a severe pandemic or that this is bad, you need to step back and think about what’s happening in this country,” Adalja told Healthline.

“We are still very much in the middle of this pandemic, and we have to prepare for it to get worse as it gets colder and people are doing more things indoors.”

We may never know the source or how the president contracted the novel coronavirus.

Over the week leading up to his diagnosis, he traveled to five states, holding large political rallies and smaller fundraisers.

On Thursday afternoon, he even attended an indoor fundraiser in New Jersey after being told one of his closest aides had tested positive for COVID-19.

There was little to no masking or physical distancing. To keep the president safe, the White House has relied on testing.

“You can get an early diagnosis, but if you don’t engage in the behaviors that will prevent infection, then you’re at risk of acquiring infection,” he told Healthline.

Schaffner says it also depends on the accuracy of the test. The rapid test has a history of false negatives.

“Somebody can test negative and still be positive. That’s a great gap in that strategy,” he explained. “That’s why you have to do the behavioral interventions, masking, social distancing, and avoiding large groups like the Rose Garden event.”

Only a handful of attendees were seen wearing masks. The crowd sat closely together and were spotted hugging and shaking hands.

In the aftermath, one after another has tested positive for COVID-19.

“That could have been a so-called superspreader event where there were one or more people who had no symptoms or modest symptoms and were shedding a lot of virus, which then exposed a lot of people and caused them to have an infection,” said Schaffner.

“Probably the vast majority of people at that event, since they were willing to be crowded together and willing to be there without their masks, in their private lives, they had other opportunities for exposure,” he added.

Since then, a list of at least 30 people who have tested positive for COVID-19 has emerged involving Trump’s inner circle, the White House, and top Republican officials.

The latest people added to the count on Monday included White House Press Secretary Kayleigh McEnany and two of her aides.

Who else was exposed?

Who should be in quarantine?

The White House is being tight-lipped about many of these questions.

Its medical unit is said to be doing its own contact tracing.

Officials in New Jersey are also doing contact tracing. They’re still trying to track down some 200 donors who attended that high-dollar fundraiser with the president last Thursday but who are now scattered across the country.

And there are more worries about exposure at the presidential debate. The president’s family members didn’t follow the rules and didn’t wear masks.

News that the president tested positive was unnerving for Kristin Urquiza.

“I was shocked, I was terrified, I was angry,” she told Healthline on Monday.

Urquiza, co-founder of Marked By COVID, lost her father to COVID-19 in June.

She told Healthline in August that she blames Trump for downplaying the virus.

At the debate, she was a guest of the Biden campaign, seated on the front row, next to the Trump family and about 15 feet from the president.

“I had a test done on site at the Cleveland Clinic and agreed to wear a mask. We followed a set of rules the president and his entourage completely disregarded,” she said on Monday.

She’s getting tested again and has gone into quarantine.

“It’s a life-and-death situation. Even if I don’t have symptoms, I could still be a carrier of something that can end somebody’s life,” she said. “That’s a huge responsibility. I couldn’t live with myself if I knew that my own reckless behavior would result in that.”

She added, “I’ve seen the darkest results of COVID. I know firsthand from watching my dad suffer just how undignified and lonely that fight is and that death is. I wouldn’t wish COVID on my worst enemy, and it’s heartbreaking to me.”

Will the president’s illness change behaviors?

“It should change behaviors… You see the president being hospitalized and getting experimental therapies. That should be a turning point for many people who haven’t taken this seriously,” said Adalja.

But Schaffner isn’t certain that’s what will happen.

“I’m dubious,” he said. “It didn’t happen in the U.K. that everybody started to wear masks when [Prime Minister] Boris Johnson really was very sick. I mean he got seriously ill, just short of intubation, and it didn’t have a major change in the U.K.,” Schaffner noted.

“It will make a difference only if and only after the president himself changes his behavior and how he talks about the virus,” said Urquiza. “We need the president to be a president and put public health in front of a political agenda.”

That would require a significant about-face.

A new study out of Cornell University says the president has likely been the largest driver of COVID-19 misinformation. He has talked about miracle cures and said numerous times that the virus will simply fade away.

Over the weekend, in multiple tweets and videos from his hospital room, the president didn’t address the need for mask wearing nor has he talked about changing his behavior.

In fact, on Monday he announced that he would leaving Walter Reed Hospital that evening and then tweeted this:

“Don’t be afraid of COVID. Don’t let it dominate your life. We have developed, under the Trump administration, some really great drugs and knowledge. I feel better than I did 20 years ago.”